Holy carp. This music video is downright amazing.. but then, it does push a few buttons for me, not least that it's all about cybernetic (transhuman? Synth?) furries. And it's as perfectly produced as anything a big studio might put out. Seriously, watch this as soon as you can. =:D Night Runner ft. Dan Avidan "Magnum Bullets".

All the factual information and current data you could want on Coronavirus-19, c/o Oxford University's World in Data.

Want to help change LGBT law in Japan for the better? Contribute to this crowdfunding campaign. "We — Elin McCready and Midori Morita — have been married for 20 years, originally filing paperwork in Japan, where we live. Elin filed a petition to change her name and gender in the US in October 2018 and changed this information on her passport. However, Japan has refused to recognize her gender transition on some documents, because doing so would result in de facto acceptance of same-sex marriage, which Japan doesn’t currently allow. This means that some of Elin’s paperwork says M and some F, even just within Japan, which is as far as we know a unique situation, and our marital status is ultimately unclear."

Here's a rather lovely old piece of fan art that Xinjinmeng did for SuperCee back in 2006, illustrating a Suzanne Vega song. ^_^

"Here's a thought you may find heartening:

I work for a company, Carbon Lighthouse, that addresses climate change by retrofitting commercial buildings to use less energy. For most its existence, CL has had a very clear understanding that investors absolutely NEVER wanted to hear the "C-word." WE track impact in terms like "equivalent to taking X diesel power plants permanently offline" but to THEM we sold it exclusively in terms of utility bills.

But... In the last 18 months or so, that's abruptly changed. The big Business-y people actually want to hear about climate impact now. They volunteer questions about their carbon footprint. We can even sometimes sell to customers who are going to see dollar savings they would not invest in.

The fascinating story of a feminist who continues to be erased from history, Alexandra Kollontai: "How the socialist behind paid child care and parental leave was erased from women's history. Alexandra Kollontai also helped liberalize divorce, gave women access to their own earnings and advocated for women's right to sexual autonomy."

You may recall that color laser printers overlay a tiny array of dots on every page they print, uniquely identifying the printer used to produce the document. Here's a tool to decode and conceal them. 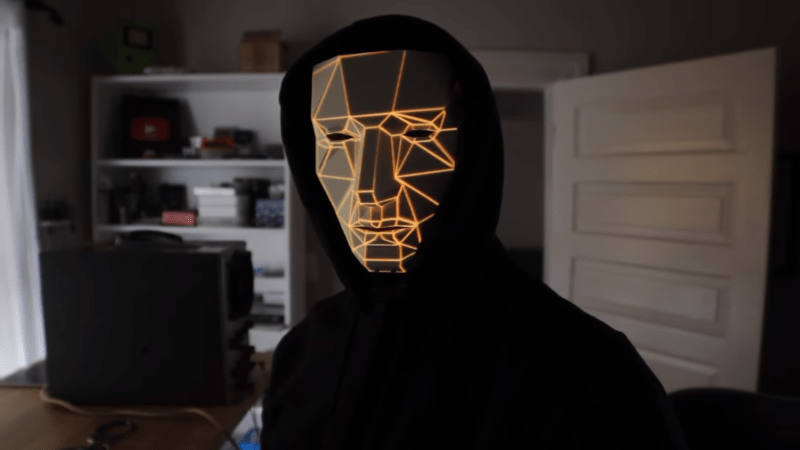 This is a project I'd love to copy and improve on: make a faceplate with a projector, so you can internally project any visuals as your face. =:D

An interesting read on laziness: "I’ve been a psychology professor since 2012. In the past six years, I’ve witnessed students of all ages procrastinate on papers, skip presentation days, miss assignments, and let due dates fly by. I’ve seen promising prospective grad students fail to get applications in on time; I’ve watched PhD candidates take months or years revising a single dissertation draft; I once had a student who enrolled in the same class of mine two semesters in a row, and never turned in anything either time. I don’t think laziness was ever at fault. Ever. In fact, I don’t believe that laziness exists."

Rather a cool project if you're interested in astrophotography: OpenAstroTracker, a 3D printing & microcontroller project for an astro mount for a camera, so it can keep aiming at a specific area of the night sky, even as the Earth twirls - ideal for multi-hour exposures into deep space. It's currently only good for between the latitudes of 15N and 55N, however, as some of the printed parts are latitude specific, within a few degrees, so you need to build it according to your location.

A brief (45s!) bit of nerdy amusement: "Why programming manuals aren’t on audiobook".

Okay, this was rather fun. ^_^ A few months ago, a furry commissions a pice of a fur squashing a boss, with a pro-IWW (labor union) message. The other day, the IWW reposted it to their FB page. =:D That's picked up by the Daily Dot, interviewing the commissioner. And most recently, the IWW Twitter stated "Furries are welcome as long as they're not cops or landlords :3c Join the one big uwunion" ^_^ Followed by suggested IWW affiliates for fursuit makers and furry artists.

Tech for good! These folk install remote microphones in rainforests, listening for signs of human activity - eg motorcycles - which doesn't belong there, with the aim of reducing deforestation. They also have an iOS & Android app which lets you listen in on rainforests worldwide.

I's got drawned again! ^_^ This time, by Mirima, who put out a call for OCs to doodle. I said I'd be tickled to see myself as a cheerleader, so.. =:D

Rather a cool YouTube channel: the Korean Film Archive, with hundreds of classic Korean films for free viewing!

First season is actually one character sending communiques that tells a story. Each episode is fairly short. There is a version that is all of them together.

Season 2 gets more interesting with multiple voices from characters we've had described.

Of the characters we have:
- A gay man
- A trans man
- An Aro polyam woman
- A cyborg who's a member of a triad
- A character using xe/xir pronouns

Here's a good report on how the UK can meet its carbon target for 2050, where it is now, and what needs to be done to get there.

The space industry's certainly gathering pace gently, with not just the larger players launching large payloads more cheaply, but smaller ones too, with quite different goals, like Astra Space, based in the Bay Area, which is aiming for microsat launches, with only around good reliability of around 95% - not a problem when you're making the satellites in bulk, so if you need to make another couple to make up for less than perfect reliability, the saving's more than worthwhile. And even more extreme, but seemingly entirely practical with current tech, is the idea of a lengthy coilgun to rapidly accelerate the payload at an acute angle. With the extreme forces involved - thousands of Gs - it's unsuitable for humans or anything else fragile, but perfect for bulk loads like oxygen, 3D printer material, or water. The company involved estimates around $50/kg, vs the lowest cost options currently at around $1400/kg.

The big caveat is it's not actually available yet, but, did you know there's a browser under development that isn't WebKit or Chrome based underneath? Meet Flow, originally designed for set-top boxes, but they've been working on generalising it for broader use.

Is this bunny latex mask by not gorgeous? ^_^ I mean, sure, I'm biased, but not only is it a rare representation of lapinity in latex, but it's also simply a beautiful example of the craft.

A fascinating bit of investigative journalism, looking at the professional lobbyists assisting climate change denialism. "We are tracking an international network of climate change deniers, ranging from conservative American billionaires to the German AfD. We want to understand their links and strategies. We tried to get the information by going through the normal channels, but we failed. There was only one way to get into the inner circle: We had to go undercover. That’s why we’re sitting at this table – and that’s why we’re nervous. We keep checking the hidden cameras, one of them in Katarina’s pen, which she’s wearing on her conference blazer. We try to keep the cameras stable while acting naturally and making small talk."

This sounds pretty much perfect: the Silent Book Club. "The format of a Silent Book Club meeting is simple: The group picks a time and a place, and everyone brings a book to read of their choosing. For the first half hour, people order drinks, share what they’re reading and get settled. Then, it’s an hour of uninterrupted quiet reading time. After the hour is up, people are invited to start chatting again — or, keep reading if they so choose. Informally, they call it “Introvert Happy Hour.” “It provides a space for people who want to get out of the house and spend some time with friendly-minded people, but don’t want to go through that whole awkward small talk,” said de la Mare. “You have a book in your hand, so it’s really easy to talk about what you’re reading. And when you get to that moment of not having anything else to say, it’s totally socially acceptable to go back to reading.”"

Riot Radio's blurb claims "This cross-gender and genre-defying channel celebrates those artists taking a stand for feminism. With Beyoncé, Austra, Warpaint, Missy Elliott, Sookee, PJ Harvey, Bikini Kill and many more." And indeed, an initial hour or so's listening checks all the boxes - mostly/all women/enbie/GNC, no ads, and station idents only occasionally. No DJs, unfortunately, but on the other paw, that does mean essentially uninterrupted music. Their official player is over here, but it's a bit finicky - you can just plug this URL into your favorite music player instead. ^_^ The downside is it seems to have a very small playlist, so it won't take more than a few days' listening to start hearing the same numbers.

If you'd like some good places to donate to help with the aftermath of the Puerto Rican quakes - local, grassroots orgs, not the usual medical monoliths - here's a thread with some excellent suggestions.

Peggy came up with a rather cool tribute to Neil Peart.