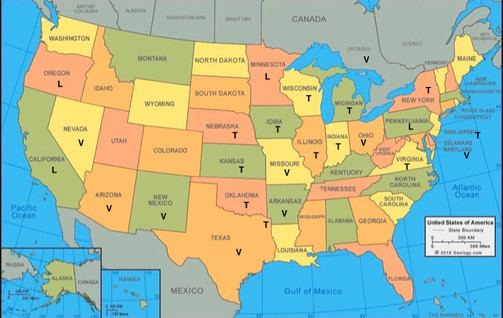 It's been a while since we did these, ne? ^_^ Here's the original map, and I've annotated it with L = lived (more than a month), V = visited (stayed at least a night), T = through travel only.

Did you realise you can use a tattoo removal laser for welding?

*giggle* "Someone tried to connect to my MUD via their browser and because of how character creation works right now, that kind of worked so there's now a player standing in Crossed Candles Inn with the user name "GET / HTTP/1.1""

Data Feminism is well worth a read: it's rich in facts, and connects the dots, which so much documentary writing fails in (hence why James Burke's "Connections" was such an engrossing series!) It's all free, downloadable in a variety of formats, including PDF, ePub, and Markdown.

[Serena] Williams wrote that “Black women are over 3 times more likely than white women to die from pregnancy- or childbirth-related causes.”

While these disparities were well known to Black women-led reproductive justice groups like Sister Song, the Black Mamas Matter Alliance, and Raising Our Sisters Everywhere, as well as to feminist scholars across a range of disciplines, Williams helped to shine a national spotlight on them. And she wasn't the only one. A few months earlier, Nina Martin of the investigative journalism outfit ProPublica, working with Renee Montagne of NPR, had reported on the same phenomenon. “Nothing Protects Black Women From Dying in Pregnancy and Childbirth,” the headline read. In addition to the study also cited by Williams, Martin and Montagne cited a second study from 2016 which showed that neither education nor income level-- the factors usually invoked when attempting to account for healthcare outcomes that diverge along racial lines-- impacted the fates of Black women giving birth. On the contrary, the data showed that Black women with college degrees suffered more severe complications of pregnancy and childbirth than white women without high school diplomas.

But what were these complications, more precisely? And how many women had actually died as a result? ProPublica couldn’t find out, and neither could USA Today, which took up the issue a year later to see what, after a year of increased attention and advocacy, had changed. What they found was that there was still no national system for tracking complications sustained in pregnancy and childbirth, even as similar systems have long been in place for tracking things like, for instance, teen pregnancy, hip replacements, and heart attacks. They also found that there is also still no reporting mechanism for ensuring that hospitals follow national childbirth safety standards, as is required for both hip surgery and cardiac care. “Our maternal data is embarrassing,” stated Stacie Geller, a professor obstetrics and gynecology at the University of Illinois, when asked for comment. The Chief of the CDC’s Maternal and Infant Health Branch, William Callaghan, makes the significance of this “embarrassing” data more clear: “What we choose to measure is a statement of what we value in health,” he explains. We might edit his statement to add: it’s a measure of who we value in health, too.

The lack of data about maternal health outcomes, and its impact on matters of life and death, underscores how it is people who end up affected by the choices we make in our practices of data collection, analysis, and communication. More than that, it’s almost always the bodies of those who have been disempowered by forces they cannot control, such as sexism, racism, or classism--or, more likely, the intersection of all three--who experience the most severe consequences of these choices. Serena Williams acknowledged this exact phenomenon when asked by Glamour magazine about the statistics she cited in her Facebook post. “If I wasn’t who I am, it could have been me—” she said, referring to the fact that she had to demand that her medical team perform additional tests in order to diagnose her own postnatal complications, and because she was Serena Williams, 23-time grand slam champion, they listened. But, she told Glamour, “that’s not fair.”

You know the setting for Phoenix Wright, ne? A bizarre system seemingly impossibly stacked against defendents, unless you have someone of his caliber on the case. Apparently, that's an intentional critique of the Japanese legal system. "If you are charged with a crime in Japan and brought to trial, statistics show that there is a 99 percent chance that you will be convicted." "Takashi Takano, professor at Waseda University and one of Japan's most prominent defense attorneys described it as "one of the toughest jobs in the world." In over 25 years, only five of his clients have ever been exonerated. Yet this isn't a bad record, many attorneys go their whole careers without winning a case."

This is rather special: Moments in Love, originally by the Art of Noise, here rearranged for piano by one of the original composers and co-founders of the group, Anne Dudley.

It's tricky to describe this little video of a demo, but imagine a Polaroid camera where your photos are fully 3D, and can become part of the scene being viewed.. repeatedly. ^_^

Here's a good place to download a fansub of Little Witch Academia. It's in the "school of magic" genre, with, for me, a world more fun and wonder than Harry Potter. ^_^

I've also been going through Another Life, a tale of exploration to find out what's going on, when a probe - of sorts, being a huge crystalline growth - lands/seeds on Earth. It opened very promisingly, suggesting that rare beast of TV sci-fi with the "sci", but.. well, we're continuing to enjoy it, but with definite caveats of the "why did they do that?" variety being fairly routine. A pity, as there's some good character writing, and some genuinely interesting concepts, dogged by a need to MAKE THINGS HAPPEN. Anyway, we're at the point of the final ep next time; at least, for now, as it's apparently received a second season.
Collapse