Doctor Who is getting the Mr Men treatment - and it's all official. =:D 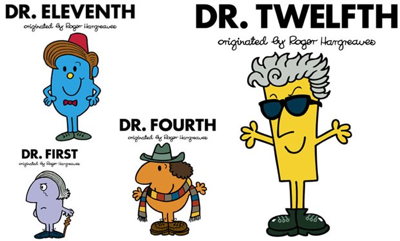 The kind of processing power we have, perfectly routinely, in our lives is really quite awesome, ne? Consider just panorama stitching - you can take dozens of photos, and have some program accurately spot matching points between them, with no instruction necessary, and warp them as necessary to make for a perfect match, even blending out differences between them, such as objects in motion. That's some fairly intensive processing - and yet, it's easily performed by any system in the home, and even on phones, to a more modest extent. Imagine trying to pull that off in the age of film!

For photographers: what apps do you use for HDR? I'm not thinking of overt HDR, so much as the more classical style, simply enhancing the extremes of range. AutoPano will perform such, but its design emphasis is really panoramas, where it does a particularly good job. I'd particularly like the ability to control the degree of contribution of the different exposures, to gain a look I'm comfortable with, given automatic HDR creations can often be dreadfully surreal. (And for me, that's not normally a bad thing =:)

Not really a story of import, as far as substance goes, beyond the fact that it's something that happened: Tim Cook met up with Shigeru Miyamoto, who can be described as influential in Nintendoland. =:)

An interesting little game idea: Really Bad Chess. "Chess is one of those games I always wished I enjoyed, but its commitment to beauty, elegance, and perfect balance always turned me away. Really Bad Chess removes these boring restrictions and flips chess on its head. As much as random pieces change the game in some ways, I was really surprised to notice how much the game remains the same, and how powerful some pieces are you've never truly struggled against a pawn until you've struggled against a pawn in the back row. For chess pros, Really Bad Chess will give you a new type of challenge the pieces & the moves are the same, but you'll have to throw out your openings and your understanding of normal patterns of play."

Sadly, I missed out on the recent New Scientist convention at the ExCeL - did anyone else I know go along? The roomie attended on Saturday, and it sounded like it lived up to every ounce of its promise, like a sci-fi con stuffed with much more of the "sci". =:) I'd hoped to get along, but the trip got in the way. Oh well. ^_^

Here's a look around the Bay Area, in a 360 degree panorama from Inspiration Point. You reach it by half-killing yourself clambering up the peak from Nimitz Way, which is a gorgeous walk (across one of many different routes through Tilden Nature Area) from the ridgeline above Berkeley, which you can easily reach courtesy of the 65 or 67 AC Transit buses departing from the stops by the downtown Berkeley BART. (Note that during weekends, the 67 dips down into the park, but also ends earlier - about 7pm) I'd very much recommend viewing the full size version fullscreen, for a better feel for just how large the view is. ^_^ (And even that version isn't the full size - the stitched output from AutoPano Giga 3 is 50926 x 7808. Very temping to try printing that out.. hm. At 300dpi, that'd make.. just over 14' x 2' =:)

And if you'd prefer something more subdued, but no less grand, head on over here for a gorgeous pre-sunrise in Colorado, courtesy of

Yay! Just managed to renew my LJ account for another year. (Am I right in thinking LJ hasn't offered permanent accounts in a while now? I know they've only ever been available for limited periods now and then, but I haven't seen that in a few years now) Always a nice sort of feeling to have that squared away.
Collapse