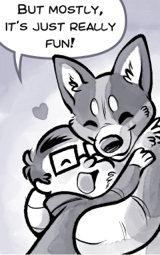 I blinked a bit when I saw the word "fursuits" in the title of the latest comic from the good folk behind Oh Joy Sex Toy, which usually reviews sex toys and sexual practices. But, no, it's a genuine examination of just what it is that appeals about 'suiting, and correctly notes that sex in the fur is quite rare, and far from the primary motivation to spending anything upwards of a few thousand dollars. (The comic is completely SFW, but some of the page furniture might raise eyebrows =:)

Sort of relatedly, Christopher Guest (This is Spinal Tap, Best In Show) is cooking up Mascots, a comedy film project for Netflix, coming on Oct 13 2016, set in "the ultra-competitive world of sports mascots where they compete for the most prestigious award in their field, the Gold Fluffy". ^_^;

Music video of the day: Yelle - "Ba$$in". The track itself is a fun bit of electropop, but it's the video that makes it - delightfully odd. =:) And then there's Morcheeba - "Enjoy the Ride", a mellow, funky track, with the video showing an unexpected outcome of attempting to raise the dead. (Only a 240p file, though - if anyone knows of a better quality version, give a shout) 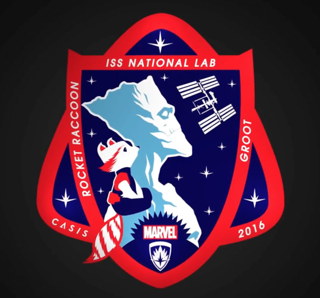 I hope everyone already knows of Derek Lowe's legendary "Things I Won't Work With" series. =:) If not, well, imagine the wonderful world of chemistry, where you might, at times, be faced with trying to produce or use extraordinarily feisty molecules. Here's one entry on peroxide peroxides. Not only do you get to read about just how very difficult these kinds of compounds can be to - well, not even work with, so much as have nearby. "There are a lot of things, unfortunately, that can lead to peroxide decomposition – all sorts of metal contaminants, light, spitting at them (most likely), and it doesn’t take much. There are apparently hobbyists, though, who have taken the most concentrated peroxide available to them and distilled it to higher strengths. Given the impurities that might be present, and the friskiness of the stuff even when it’s clean, this sounds like an extremely poor way to spend an afternoon, but there’s no stopping some folks." "But I have to admit, I’d never thought much about the next analog of hydrogen peroxide. Instead of having two oxygens in there, why not three: HOOOH? Indeed, why not? This is a general principle that can be extended to many other similar situations. Instead of being locked in a self-storage unit with two rabid wolverines, why not three? Instead of having two liters of pyridine poured down your trousers, why not three? And so on – it’s a liberating thought. It’s true that adding more oxygen-oxygen bonds to a compound will eventually liberate the tiles from your floor and your windows from their frames, but that comes with the territory."

From the BBC: Is my brain male or female? (There is some trickery =:) 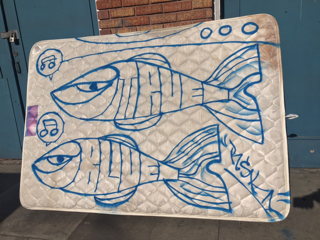 A sort of game recommendation: Abyssrium. It's not really a game as such - actually more of a clicker. But.. it's actually really pleasant. And there is no need to pay money. There are means, but that's entirely optional. You can simply enjoy letting things happen. ^_^ The setting is centered around a lonely coralite, which you can help to grow, along with various corals, seaweed, and suchlike, as well as zapping into existence new fish, cetaceans, and jellyfish. It's quite beautifully presented, and makes a superb screensaver - though, being quite graphically intensive does mean your iPad or suchlike will become quite hot around its GPU; I wouldn't recommend it for prolonged periods when running off battery.

TIL that the oldest church in England still in regular use has a single pew for four people, and standing room for another six. ^_^

I rather like this. Someone put out a "free mattress", sufficiently worn looking that it attracted no interest as a mattress, but some as a canvas. =:)

Here's an interesting little cinematic tidbit: a visit, in 1944, to the Nippon Kogaku Totsuka (now known as Nikon) factory, Yokohama. Being wartime, it's intended to convey the diligence and craft exercised in the creation of the optics required. What elevates this six minute short above mere propaganda, however, is its director: Akira Kurosawa. =:D
Collapse