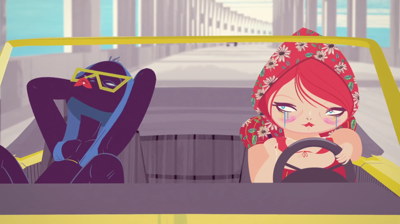 *squee* I've only just realised Studio Killers came up with a video for Jenny, one of my favorite tracks on their album. ^_^

Watch out for a 50th anniversary Bonzo Dog gig in November, with guests including the likes of Bill Bailey, Tim Brooke-Taylor, Stephen Fry, and Brian Blessed. =:D

Also for those within reach of London: New Scientist is holding their first convention at the ExCeL, Sep 22-25 2016 (Thu-Sun), with guests including such folks as Tim Peake, Festival of the Spoken Nerd with Helen Keen, Astronomer Royal Martin Rees, and the Exomars Rover, and panels including How to Hijack a Satellite, Control Room: AI Apocalypse, and How to Test Your Own DNA. Tickets are bookable now, from £25 for single day tickets in advance (it's a four day thing, so you'll want to plan which day(s) feature what you're most interested in) for standard admission, £45-50 for VIP, through £45 for any two days, to £90 for all four days.

I finally tried a bit of the cinnamon vodka that's been steeping for.. probably over a year by now. Wow. =:D It's pretty much exactly as you might imagine: absolutely untamed, pure CINNAMON. Rather delightful, actually.

I sort of miss the old Apple watching days of yore, where observers like As The Apple Turns (still perhaps the best Apple related site there was, with incisive wit and insight, wrapped into plenty of parody as well) would speculate on the goings on, with as much to go on as in the Soviet days. =:) Still, there are occasional glimpses into more interesting speculation beyond what the next phone will offer, as in this tidbit that their car project has apparently landed the founder and former CEO of QNX. That, to me, is interesting, as QNX is legendarily stable - the epitome of the hard realtime OS. (Hard as in, you get to specify rigid timeslots, and things don't get to overrun. Useful in situations where something not being processed in time could have Bad Consequences)

There are innumerable "Best" lists out there, mostly rather pedestrian in scope - but this one, I feel, is worth highlighting: the Best 50 Animated Films of the 21st Century so far. It does include some universally known titles, particularly toward the end, but plenty that are more in the realm of animation geeks and cinephiles, like Ernest & Celestine, and The Girl Who Leapt Through Time - and they do give well-deserved nods to several other excellent productions in the footnotes. (Thanks to

Monday was actually quite reasonable, weather-wise, and I had a bus ticket all paid for - it would have been churlish not to leap at the rabbiteering opportunity. ^_^ Whilst there wasn't any great drama, I did love this momentary expression on one bun (quite unusually, as buns almost only ever partake of grass from the top downwards, for a part of the way, before proceeding elsewhere; the main reason they'll do otherwise is to help furnish a nest, which wasn't the case here) yanking on a grassy stalk, apparently putting up greater resistance than they'd anticipated. ^_^


Transformation sequence of the week is by AmberAria, relating to a roommate's secret, and how he can ensure his friend keeps it.. ^_^ one, two, three, four, and the final page, five. And it would appear there is a sequel in the offing.

Ye gods and little fishes, but I'm out of shape.. the roomie had a load of wood delivered the other day, for some decking around the back of the house (yay, barbecue time!) - a few dozen long, treated and grooved planks for the surface, plus a load of thicker supports, and some baby (yet still 20kg each!) bags of concrete. It took the delivery guy a matter of minutes to unload from the van into the driveway. It took us about half an hour, together, to shift it all - around 650kg, per invoice - around to the back yard. ^_^; Still, I can't deny - it was fun. ^_^ (And he paid for pizza afterward, yay!)
Collapse