Another for the list of net.radio stations worth listening to: Radio Paradise, nestled in the Sierra Nevada foothills, with the playlist just now including Philip Glass "Anthem Part 1", Afro Celt Sound System "Big Cat", and David Bowie "Heroes" (live). And no advertising at all! It's apparently entirely listener-supported, which seems like quite a remarkable achievement.

If you used to follow The Abominable Charles Christopher, but gave up on anything new being posted: it's alive!

If you're into electronics, how about this rather cool 555 replication using discrete components? You can construct circuits using it just as you would a normal 555, but with the advantage of being able to inspect the signals inside the 555. Too simple? How about a full 6502?

In an intriguing experiment along Humble Bundle lines, the dev of Mekorama's set the app to free, and included purely voluntary IAPs ranging from 99¢ to $31.99, so you can pay whatever you want/can afford. 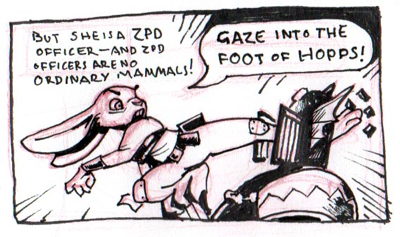 paka came up with a most wonderful Zootopia/Dredd crossover panel - anybody who's read the story in question will recognise it immediately. =:D (And here's the original)

Another US option for PAYG: Ting. They don't offer bundles, but tiered pricing for minutes, SMSs, and data, with the bill at the end of the month being based on what you've actually used of each. It's not down to European level pricing, but it's appealing for lighter usage. And they do operate with both GSM and CDMA support, so any phone will work. Meanwhile, in the UK - you've likely heard of GiffGaff, but it looks like iD Mobile may pose some competition, with their lowest tier at £4 offering 250 mins, 5000 texts, and 250MB. Much more expensive for out-of-bundle calls, with UK calls at 40 vs 10p, and the US at 6 vs 2p, but that's a minor point unless you're going pure PAYG. iD apparently runs on 3's network.

Well, the Fursonas movie is now available on iTunes, and on the front page, even, under "New discoveries", as well as several other services. I haven't seen it yet, but I think I'd like to - this seems like one that's been well conceived. Here's the trailer.

I wanted to convert a short video file into an animated GIF, but wasn't sure how best to go about it, given I very rarely produce animated GIFs, let alone from video. Lo, there are plenty of online converters, eg online-convert.

I returned, with some degree of trepidation, to my buns on Monday, as the weather was looking good (with a week ahead of relative dullness, looks like) - what would I find? Would there be any survivors of the scourge coursing through that warren? I'm.. maybe not quite optimistic as such, as it doesn't look like it's all done yet, and numbers were indeed sharply down, but there were several seemingly (for now?) in good health, and as active as ever, demonstrated here by one quick sunset pursuit. ^_^