A Spike episode? I was approaching "Gauntlet of Fire" with some degree of trepidation, but it turned out superbly. ^_^ Needless to say, I'm very much hoping this isn't the last we'll see of Ember. No new episode today, sadly. 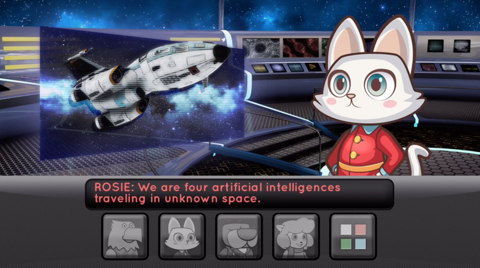 A couple musical offerings I've enjoyed recently: General Mumble "M/L/P/R/M/X/E/P", being a highly processed bit of electronica based on various MLP songs. I'm normally not one for autotune, but here, it's been quite openly deployed, retuning the harmonies entirely, turning the tracks into quite novel reworkings, far beyond the usual additions of bass/rhythm. And, tallulahgoodtimes "SwangYoThang2", a refreshingly punchy bit of electroswing.

So, we'll apparently learn of the Doctor's new companion this evening. [ETA: it's Pearl Mackie - and the teaser is well worth watching!]

I mentioned Star Billions the other week - and having completed Season Two, I've got to recommend it. ^_^ Here's a good interview with the developers, going into the design choices, and even how people wound up reacting to the AIs on offer, from the gung-ho SARGE, to the conciliatory LACIE.

Actually completely SFW is the Wikipedia entry for tendril perversion. ^_^

In the "battery technology that may actually see deployment in the next decade" department, a novel system using encapsulated nanowires. It's not about energy density, so much as lifespan - where current batteries keel over after a couple thousand cycles, this holds the promise of extending that into the hundreds of thousands, making for a battery that might never need replacing.

Interesting.. it looks like Apple is finally going the Netflix route, and preparing for developing original TV programming: "The [Sundance] iTunes Lounge was in fact part of a stealth effort by Apple to establish a new, more active role in delivering entertainment. In the weeks that followed, Apple execs were in Los Angeles hearing pitches for original TV series that it plans to launch on an "exclusives" app on Apple TV and within iTunes. Apple wants to work with "triple A-list" talent, according to a source, and build up a roster of must-see shows available only on its platform. Naturally, the talks have been veiled in the utmost secrecy. Producers who have met with Apple will refer to it only as the United Fruit Company." If those involved are indeed eyeing Netflix as their model, I'd love to see a similar degree of adventurousness, considering they've brought us the likes of Orange is the New Black, Transparent, and Jessica Jones. 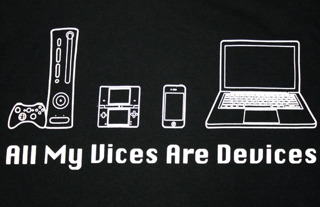 While catching up (well, sort of - I started with the archive from a random point in 2011, rather than the very start, in 2004) with Questionable Content, as mentioned by

lovelyangel, I noticed one of the artist's shirts available for sale: All My Vices Are Devices, which seemed like it might appeal to a few folk. =:) (And, don't tease robots)

Nice to see: (most of) IDW's comics are DRM-free. So, that's MLP taken care of - I wonder if Boom have similar plans, so I can maintain a fully portable Lumberjanes library. ^_^

It's an ugly webpage, but there's a lot of lesser known Bill Watterson art to be found, some from before his rise to fame, and even some afterward.

I do hope Beats 1 expands into multiple channels at some point. *sigh* They do offer some excellent shows, like The Candy Store with Charli XCX, but for much of the time, I can't listen to literally more than a track or two without hip-hop coming into the mix, sending me scampering off to En Lefko, The Flip, KLFM, Amy's FM, or Power Ponies. (I love how international net.radio is. ^_^ They're Greek, French, Croatian, French, and Czech respectively) The downside with all of them, inevitably, is the advertising - cue rapid switch to any of the others. Beats 1's is, thankfully, the least intrusive, amounting to an occasional "made possible by", taking a couple seconds. Consequently, I still wind up revisiting my own music collection a lot of the time - it may be familiar, but I can just settle into a groove, without having something disrupting that after a few minutes. =:/
Collapse