Having been reminded by

huskyteer that there was indeed an earlier adaptation of "My Family and Other Animals", I set about comparing them - at least, as far as I can, given the ITV version is ongoing, and only up to its second episode at the moment. It's proving to be quite a contrast! They're clearly from the same work, but the tone is quite different: ITV's is pronouncedly about the people involved, whilst the BBC's was a lot more accommodating about the wildlife observations he made, with some excellent photography along the way. Of course, now, I have to read the books - which, from what I recall of the readings by my biology tutor back in the Jurassic, will not be any burden. =:)

If you want to watch a film, where will you be most likely to do so, and why? Are you an avid cinemagoer, or are you more inclined to wait for the home releases? Is that because of cost, or the comfort and choice of munchables/drinks at home? For me, if I'm to be lured to a cinema, it helps a lot if there's something special about the place - cookie-cutter multiplexes.. well, aren't exactly brimming with personality, let alone the food and drink. On the other paw, there are places like The Little, over in Bath, crammed into a central Georgian nook, or the fabulous Castro Theatre, with just one screen, and genuinely a big screen, with ornate 1920s movie palace decor all around. The cost is certainly an issue, too - it's easy to spend not much less on a single ticket than for a copy you can watch as many times as you like, and home cinema setups now can be quite impressive, with an excellent choice of cider, beer, and wine to accompany. =:) 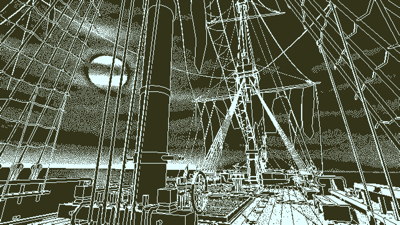 Gently wonderful: what does a bicycle look like? An easy question, you might think - and so, a designer collected people's sketches of bikes, and produced realistic renderings of them. "Some did get close, some actually nailed it perfectly, but most ended up drawing something that was pretty far off from a regular men’s bicycle. Little I knew this is actually a test that psychologists use to demonstrate how our brain sometimes tricks us into thinking we know something even though we don’t."

From the dev behind "Papers, Please" comes a playable demo ("It's not meant to be a proper demo of the final product but it's probably safe to extrapolate from here. Barely tested and possibly full of bugs. Progress is not saved.") of their latest project, Return of the Obra Dinn, with graphics this time in glorious 1-bit. "Obra Dinn's demo starts with players pulling a rowboat up to an abandoned ship, which they board and walk around in search of treasure. The only thing on the ship, it turns out, is a crummy old pocket watch, but before getting off the ship, players come to realize that the watch can be used to discover ghost skeletons—and replay the moment in which each person died over a century earlier."

The £1 coin will be changing in 2017, commencing in March, with a six month switchover. The newcomer is a dodecagon - twelve sided - and bimetallic, similar to the £2. Apparently, counterfeiters are a touch too adept with the current design, with around 3% (!) of current £1 coins being fakes.

I'm pleased to note that Zootopia is 2016's biggest grossing film worldwide, at $854m, followed by Batman v Superman with $787m, and Deadpool at $757m. And deservedly so. ^_^ And speaking of which, this interview with Ginnifer Goodwin is worth a (sadly brief) read, confirming the story evolved quite a bit - hopefully, the home release's extras will explore that, as Wreck-It Ralph's did. The same site also talked with the directors about the selection of species for the stars, and the challenges involved in maintaining scale.

How good can Second Life look? This good. ^_^ A scene from the long-running Insilico sims, by Stark Osterham, "Ghost Whisper":

For pony folk: an interesting post on translation of one of the show's songs, "Hearts Strong as Horses". Of course, when you're translating a song, the difficulty elevates - the tune can't change, so the number of syllables you've got to play with is (more or less) fixed beforehand.

As for the new season: the opener I overall enjoyed, but felt the pacing to be quite uneven, and I'm unsure as to why Sunburst exhibited such retiscence at being deemed a wizard, when he clearly was just that, and very much so. The baby scenes were surprisingly well handled, leading into some good, old fashioned chases, not to mention the pivotal plot point. ^_^; "The Gift of Maud Pie" was a relatively simple episode, and ultimately, wonderfully charming. "On Your Marks" felt somewhat uneven, and relied upon an awkward misinterpretation, but had some definite highlights, with the ending resolving surprisingly well.

An interesting tale, and one with - we hope - a happy ending, of some people in the middle of nowhere in Kansas, who started getting angry calls, letters, and visitors, for no reason they knew of. It turns out to be the result of one company's widely used geolocation database - for the most part, quite useful, within limits. But where they don't have any accurate location data, they use defaults - and a very popular one happened to be where they lived, pointed to by some 600 million IP addresses.

Tuesday saw some.. well, unscheduled rabbiteering, turning out to be something of a blessing in disguise, as the forecasts had been suggesting it'd be Wednesday with the better sun during the afternoon and evening, when it turned out to be largely rather cloudy. And because I happened upon this group of tinybuns, gathered by one of the warren's entrances, sufficiently cool with my presence as to allow me to pass by (eventually =:) without feeling the need to seek refuge. Indeed, I was close enough at this point that I've only cropped the photo slightly vertically. To be that close, and tolerated by my subjects (so to speak, not that I would have any objections to being Queen of Leporines =:), is indeed a touching and humbling moment. ^_^

And in a "what a world we live in!" moment, we now have Flappy Bird ported to an e-cig.
Collapse