A new con, with an interestingly geeky backer: Woz introduces the Silicon Valley Comic Con, March 18-20, in the bowels of San Jose. 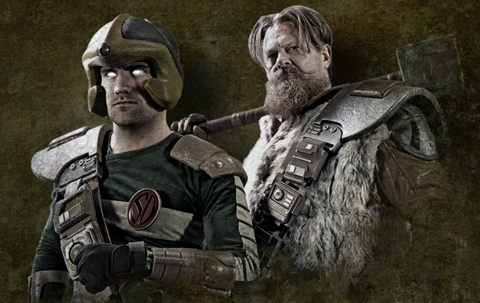 Oh, this is wonderful.. I was curious to see if the Judge Minty team were making a sequel, and it seems not, with their energies directed instead at another long-time 2000AD (okay, originally Starlord) series: Strontium Dog. =:D

Some new details have emerged regarding 2017's new Star Trek series: "The creative plan is for the series to introduce new characters and civilizations, existing outside of the mythology charted by previous series and the current movie franchises." Fascinatingly, the showrunner will be Bryan Fuller, who gave us Pushing Daisies and Dead Like Me, and is also in charge of the forthcoming adaptation of Neil Gaiman's American Gods. Could be fun!

Tell me about your spice rack. ^_^ What wonders does it hold? Here, I maintain a reasonable mix of herbs, spices, and blends. Off the top of my head, there's: basil, sage, rosemary, Tellicherry pepper, sweet paprika, smoked hot paprika, asafoetida, mace, lemon myrtle; Berbere, ras el hanout, and a peppery mix whose name I forget; black cardamom; shrimp, ginger, and mango powders; balsamic vinegar, fish sauce, dark soy sauce, and probably one or two I've forgotten about. ^_^; In the fridge, there's always oyster sauce, which I find very useful in stir-fries, either as a primary flavor, or just a taste booster, as well as garlic paste, mustard (usually Maille dijon), and some variety of heat, such as chipotle paste or finger chillis.