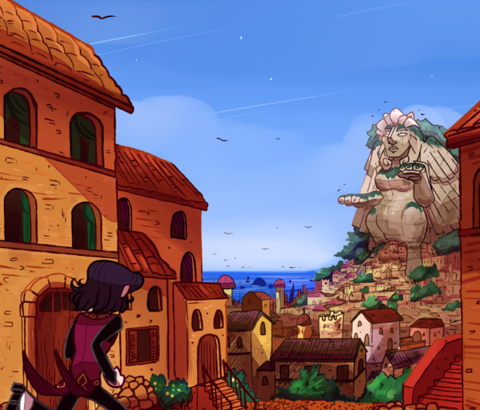 It's quite to be expected that when a famous musician dies, their albums see a bump in popularity. A "bump" in the case of David Bowie apparently means 25% of the Top 40 is his, with nineteen albums in all (re-)entering the Top 100. It was indeed sadly impressive to see just how extraordinarily widespread reporting thereof turned out to be, appearing on many sites otherwise unconnected to music, even topping Y Combinator's Hacker News, the geek news hub.

Comic recommendation of the day: Never Satisfied. The story begins with a group of magical apprentices attempting to prove their worth in a somewhat unorthodox competition of capturing birds. The art style is somewhat reminiscent of the animation era of the 1950s and 1960s, drawn with panache, without being self-conscious, as with Little Kitten Teeth. Meanwhile, Snarlbear is.. sort of a fantasy, set in a strange world with variously ravenous animals and plants, and with a beautifully unconstrained use of vibrant hues. (The title comes from our hero's nickname, given to her upon entering the world abruptly, and promptly vanquishing a bear with entirely too many pointy teeth)

On geek tools: Ops 'n Lops. Have a peek within, to see how easy it is to manage a large operation remotely, with the right tools. Myself, I hadn't been aware of mosh, helping make secure connections sane over potentially high latency connections, such as cellular, as well as transparently restoring a session even from a new IP, such as going from cellular on the move to DSL back home.

Following something of a recommendation from

lovelyangel, we finally saw the recent version of Jem and the Holograms. Which, yes, we both thoroughly enjoyed. ^_^ True, the writing at points could have used some fine tuning, but fundamentally, the sense of exuberance at success, and the desolation following, rang true. (And it has to be said, who wouldn't want to enjoy such a series of incredible makeovers? Not sure I'd really be one for violet hair, though. Maybe a rich auburn, or maybe just absolutely in your face fluorescent pink. ^_^) 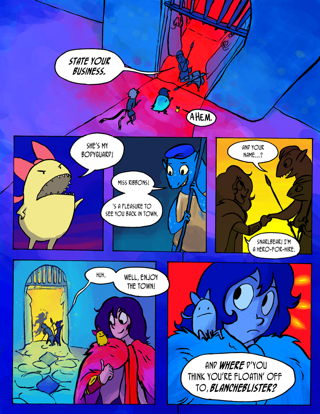 And: one guy's intrepid experimentation to recover teletext data from old VHS tapes. Previously, the quality stored wasn't sufficient to decode with any useful level of accuracy, but with current processing, that's become possible. So we're receiving stacks of teletext pages from the 1980s. =:D

Open to: All, detailed results viewable to: All. Participants: 14

Have you heard of Oingo Boingo?

About those gravitational wave detection rumors.. they're very much just that, and no more. As the writer cautions: "The current excitement could easily be a false alarm. Even if LIGO has a promising signal, it may be a false test signal planted as a drill. It's been done before, in 2010 near the end of LIGO's last pre-upgrade run. Three members of the LIGO team are empowered to move the mirrored blocks by just the right traces in just the right way. Only they know the truth, and the test protocol is that they not reveal a planted signal until the collaboration has finished analyzing it and is ready to publish a paper and hold a press conference. “Blind tests” like this are the gold standard in all branches of science." It's a spectacular experiment, regardless, "looking for changes in the distance between mirrored blocks of metal 4 km apart as slight as 10-22 meter, about a millionth the diameter of a proton. In other words, changes in measurement of 1 part in 1025."

January has, thankfully, seen a few more bright days than December 2015 - or, sometimes, just a bit brighter, as in this instance, where there'd been a little light rain earlier in the day, leaving the grass sparkling with tiny beads.


Don't suppose anyone's seen Adventures in Comedy? "A mockumentary that takes place in the cut throat world of stand-up comedy. It follows the struggles one comic faces as he gives his dream one last shot." It stars the likes of Rob Cantrell, Margaret Cho, and Janeane Garofalo, so.. there's definitely some distinct potential. (I occasionally browse the iTunes Store, and stumble upon little oddities - in this case, sufficiently unknown IMDb has no rating)