OhPonyBoy has a new video out! Blob It is a brilliantly bouncy electronic track with a dirty edge that pushes all the right buttons, to an adorbs video. ^_^ 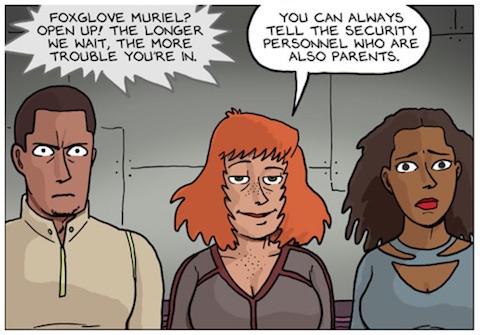 I've recently been reading all of Christopher Baldwin's current sci-fi/comedy/action strip, Anna Galactic, and perhaps unsurprisingly, I'm enjoying it hugely. I've almost always enjoyed his artwork styles (they can range quite broadly, from Bruno to Little Dee), and he's especially good with characterisation. Give it a try! New strips come every Monday, Wednesday, and Friday, so it won't take forever to catch up with the story so far, as it only began in January 2015, and looks set to complete somewhere in late 2016.

A random short story on uplifting: Concerning your Recent Creation of Sentient Horse-things on the Next Planet Over. (No, not related to ponies, although it might not be too much of a stretch =:)

Here's a sort of skatepark with a difference.. part artificial, part natural. =:)

Maybe it's finally time to update the VM setup. =:/ I don't particularly need any of them just yet, but, I'd far sooner have everything ready to roll when that time does come, than be caught with some weird-ass migration issue when the pressure's on. (I'm probably going to hop back to VMware Fusion - back when I started with them, I found the integration a touch more seamless, and it looks like Fusion 8 has an edge on Parallels 11 in performance) But.. do I update my Windows 7 Pro VM to Windows 10? I'm guessing that once the update's taken place, the license would be transferred, rendering the 7 VM unusable - or is that not the case? I think I'd prefer to go with 10, simply for being up to date, both on security and features. Anyway, VMware's running a modest extra sale for (*sigh*) Black Friday, so at the current price - valid for updating from even my relatively creaky version of Parallels - it's not a difficult proposition (around $42/£27).

Well, there go the RAW and full res JPEG off to Wanderlust (and YouSendIt still requires Flash to function? Egad. Still, it was easy enough to reinstall it, then remove it immediately afterward). Who knows? Being a runner-up would be wonderful, but I will admit, receiving a paid photography commission in Western Australia would be just amazing. =:D Even if it goes no further than this, it's gratifying to have that nod of making it through to the second round of judging.

And.. this is a limerick. =:) If you want to try working it out for yourself, don't click through, as that'll bring you to the "answer". ^_^