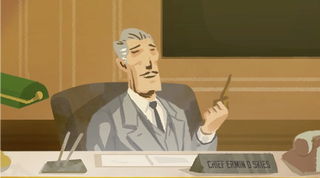 I finally got to see Inside Out a few days ago - ye gods and little fishes, I hadn't expected a Pixar production to be quite so emotionally intense, but then, given the narrative.. =:) Maybe just as well I didn't see it theatrically, else I'd've missed plenty through dabbing away tears. ^_^;

huskyteer particularly might want to check out the new iOS release "Agent A: A Puzzle in Disguise", a rather stylish point & click adventure with a distinctly "classic Bond" vibe to it, in animation reminiscent of the era. And, coming soon is Leonardo's Cat, a puzzler based around creating contraptions to convey said moggy safely around the levels. It's aimed at a young audience, but looks well crafted enough to appeal to all - and, perhaps best of all, Leonardo's voiced by Patrick Stewart, with design by Michael Frith, whose resume includes The Muppets and Fraggle Rock. The character animation seems rather wanting, curiously.

Here's a talk by Douglas Adams, from about a month before his death, talking about Last Chance to See, at UCSB. It's transcribed from this video, recorded by the University.

The Atacama desert, normally one of the driest regions on the planet, is currently in bloom.

Compo of the week: Tanzania safari for two c/o the NHM, valued at £12k. (UK entrants only) Or, if you're a musical sort, how about a suite of classical instrument applications, totaling £1800/€2420? (Open worldwide, closes today, Oct 31 2015) Or maybe an eleven day tour of Taiwan?

A couple years back, Quantic Dream released what they termed a technology demo: the taut short Kara. At the time, they noted this wasn't a new game, just a demonstration of the PS3's capabilities. I'm absolutely delighted to see she'll be the protagonist of their forthcoming Detroit, for which you can see the trailer over here. The game 'carries the tagline "Become Human," explores what happens when Kara, an android, leaves her factory and explores a life she wasn't built for. Cage says the PlayStation 4 game will also explore the question "What does it mean to be human?"'

The Burj Khalifa's certainly very tall, but, it resides in a relatively meteorologically calm region. Consider, instead, the Taipei 101, right in there with typhoons and earthquakes (indeed, it's 660' from a major fault line), but still an impressive 509m tall. To achieve stability, then, they used a tuned mass dampener mounted high in the tower, weighing 660 tonnes. So far, the largest movement observed was 100cm, during typhoon Soudelor. Lifts, of course, are always a key feature in such structures - here, they run at 55' per second, or 37mph. =:D 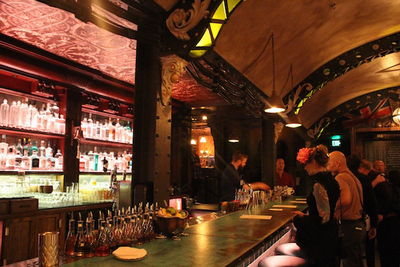 Whitechapel is a true gin palace I must visit, modeled along the lines of a slightly steampunk Tube station - and sporting some 350 varieties of gin. =:D And even the food options are interesting, like "A Brace of Quail", being "stroopwafel, scotched quail egg, corn ash", "King's Porridge" as "kamut, runny yolk, brassicas & their juices", or the entirely literal "Haunch & Flagon", being a "bone-in hunk of meat, trimmings, and tankard of ale". =:D

Well, poop. Seems The Elbo Room, where I was first introduced - and how! - to the Long Island Iced Tea is closing, with the owners not renewing the lease. Still, it's enough of an institution that I wouldn't be surprised they'll be back somewhere else.

Don Bluth wants to make Dragon's Lair: the Movie, so they've taken to Kickstarter to try raising $550,000 to fund a teaser for investment in the full production, which they're estimating at some $70m.

I'd thought it came out a while back, but

jenndolari pointed out the live action Jem and the Holograms is coming out in the US, though the studio's reckoning they'll do much better if they sit on the international releases for a few months. O.o;

lovelyangel noted this review over on The Mary Sue that's actually quite positive. I suspect I'll love it. ^_^

davesmusictank, the Independent recently published a poll showing where the UK public stands on Corbyn's positions. The results are quite illuminating, with some modest surprises, depending on your own stances.

An interesting possible lead into a treatment for tinnitus: acetyl-L-carnitine ("ALCAR").

I don't suppose anyone has all of Sweet Valerian, a 26 episode anime series of three minutes each? Checking back in my DVD catalogue only shows some of them - I appear to be missing episodes 1-2, and 22-26. There's no official English sub release (or is there?), and there doesn't appear to be any sign of it on Usenet, nor even the Bay. There's a torrent listed on AnimeSuki, but seedless. (And I may well be missing more, depending which of the few DVD-Rs they're scattered across I can actually locate)
Collapse