I can take a while to get around to films, as demonstrated the other night, when I finally enjoyed Stripes. =:) I've barely seen Harold Ramis in anything but Ghostbusters, so that was quite - well, maybe not surprise, but clearly showed just how profound a comic talent he was. So, yes, worth seeing. And on Saturday, Tomorrowland! Ye gods and little fishes, that was good. If you're looking for something sci-fi, and aren't so interested in Alien Invasion of the Week, of an aspirational nature rather than reactionary, here's a yarn you'll really go for. I'll definitely be buying it once it's available. So much fun! 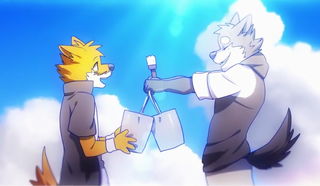 Many thanks to everyone who voted on the photograph poll, and offered their thoughts. ^_^ I was quite torn between the possibilities, and the outcome leaned distinctly in favor of Backburner - which is, thus, what I submitted as my entry. ^_^ (Of course, I couldn't just leave it alone, but set about reprocessing it, removing the slight chromatic aberration visible along the upper wing edges with DxO Optics Pro 8, and applying a couple of the filters I'd previous deployed globally as brushes instead, for a more properly localised presence) I can't imagine I stand a chance, given the number of seasoned aviation photographers the company rents to and were present at RIAT, or indeed, any other airshow this year, but I can at least try. ^_^

Here's a rather positively spirited music video, of a distinctly furry nature: Jason Chen: I Got You. Not a bad track, either. 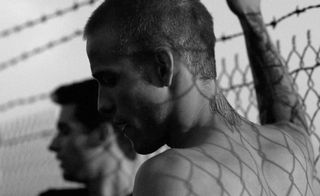 Or, for something more sultry, how about Lana del Rey: Music to Watch Boys To? Quite beautifully shot. "Del Rey told the LA Times of the meaning behind the song, “The title lends itself to a visual of shadows of men passing by, this girl’s eyes, her face.” Del Rey’s comments especially make sense after watching the video for the track which provides objectifying glances of muscled, sweaty, tattoo-ed men in shadowy silhouettes and profiles that channel Hedi Slimane’s photography." Speaking of which, Queen of Hearts "Neon" is artfully directed. Although, much, much sillier is Galantis "Peanut Butter Jelly". Needless to say, I've been enjoying that on the bus a few times lately. ^_^ (Though I suspect my most-played probably remains OhPonyBoy "Only Pony", for a fun video, and a track I just can't get enough of)

Here's a video clip as a GIF which I feel is worth watching. (

rav_bunneh will likely find it resonates) It's 10MB, so it might take a noticeable amount of time to load, depending on your connection. It features a former Uruguayan president, and some of his thoughts on democracy and necessity.

The Patreon hack data is now online, weighing in at some 15GB. "Hunt said the release appears to include the entire database taken in the hack, including a fair number of private messages sent and received by users. 'Obviously all the campaigns, supporters and pledges are there too,' he wrote in one tweet. 'You can determine how much those using Patreon are making.' In a separate tweet, he wrote: 'The dollar figure for the Patreon campaigns isn't the issue, it's supporters identities, messages, etc. Everything private now public.'" 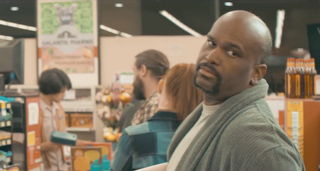 A good little interview from NPR with Tim Cook, head cheese of Apple, in which he makes his stance on privacy very clear.

Don't suppose anyone's interested in a 4th generation Airport Extreme (A1354) for some reasonable offer? It offers simultaneous operation on 2.4 & 5GHz, in 802.11a/b/g/n. I'll also want to dispose of two old PowerBooks, and I'd much sooner have them go to homes where they'll be revived or at least used for spares, than simply tossing them. One's a Wallstreet PBG3 266MHz, with a faulty PMU board (cheap to replace). It's been out of action since 2006 or so - last I knew, it was otherwise fine, though the backlight had started to turn a bit yellow. The other's a rev.A 400MHz TiBook, which is only really useful as a headless server (or SD video playback device), as the display's non-functional. All a bit silly, really - I should be able to toss them easily, given they've both been out of use for years, but there's such sentimental value in them, for me. Bunny (the Wallstreet) I bought back in 1999, when I was living in Fremont, whilst Ocelot came to me in Sydney in 2001.

There'll also be some books and magazines, for anyone willing to send postage and optional beer money. ^_^ So far, that includes a few issues of Nikon Owner (beautifully produced magazine from Grays of Westminster, offering some good interviews and shoot reports, and Nikon kit reviews), Loncon 3's guide book (a couple hundred pages), A Waste of Time by Rick Worley (whom some of you may recall from the long-running Omaha the Cat Dancer), and Anything That Loves (which I have digitally). 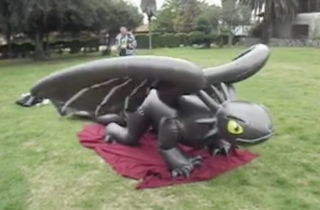 It's very geeky stuff, but still, I find their teardowns fascinating, revealing the many levels of detail that go into modern manufacturing: Fictiv looks at a Dyson Ball vacuum. (Oooh, I see they're based in the Bay - and they seem willing to invite interested geeks to wander along on Friday afternoons for their teardowns!)

Finally! The BBC's offering an HTML5 iPlayer as a beta. As I noted the other week, it's puzzled me for a while that this isn't automatic, given they generate MPEG-4 files for serving to mobile devices, yet still try to insist on Flash on the desktop, unless you identify as a mobile device.

The Apple Music free trial ended for me on Sep 30, given I'd signed up on its debut; I wound up cancelling, given current finances, and the fact I wasn't really taking advantage of access to the store's repository of music. Beats 1 continues to be available, though, and that I'm pleased with - some of the shows tend to be more "urban" (hip hop, et al) than appeals to me, but others, like Zane Lowe's, offer a broad range of styles. Elton John's retrospective show can be quite good fun, too, and he's an understandably comfortable host.

The rise and fall of DARE, the 80s/90s Daryl Gates' anti-drug program that rose to eventually pull hundreds of millions of dollars in funding, whilst having absolutely no evidence that it actually had any effect on drug use.

A Georgia Tech team's developed a novel method of harvesting electrical energy from light: nanoscale rectifying antennae. Naturally, there's a long path ahead before commercial viability, but it certainly looks like an avenue worth pursuing. 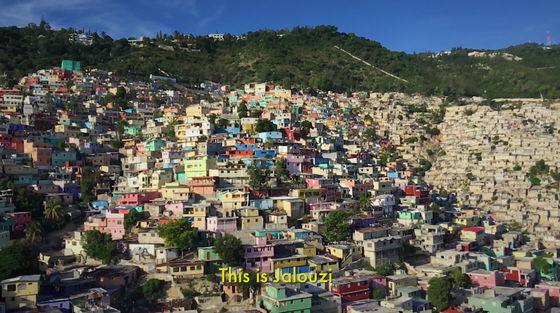 Shows how much TV I watch - I had no idea Graham Norton has joined the bearded. Rather a good look on him!

High praise indeed for Osborne, when China's state-run Global Times congratulated him on focusing on business rather than human rights.

The Painter of Jalouzi is a five minute mini-documentary that looks at "one citizen from Jalouzi, one of the largest slums in Haiti, who is determined to bring color to the impoverished area by helping paint the entire town, literally". (Filmed on iPhone 6s Plus in 4K - be sure to view in 4K if you can!) Why did they make it? "There is so much negativity in the media, so we want to show a different side of the country. It’s beautiful, and there’s so much creativity and resilience. We want to show the world Haitian heroes."

Just a little bit of fun, courtesy of the Peanuts Movie folks - Peanutize Me. ^_^ Sadly, you have to be human, so I'm out. But there do seem to be quite a lot of options available otherwise.

Well, that's a novel route into business! "In the early '90s, I would go to the Lower Haight to visit Diluvian, a used bookstore at 518 Haight St. [The space is now Nara.] They had excellent first edition hardcover books, and played classical music in the background. I would go next door to Café International to have a coffee and read. I noticed a lot of foot traffic in the café, but knew the space could be used better. The place looked run-down and neglected. I knew we could build a community here. In 1991, I took over management of Café International for a year. I offered to work with no pay, on the condition I could take over Café International as sole business owner if it worked. The owner agreed!" The article's actually an interview with Zahra Saleh, who now runs said establishment - and quite a tale it is! "Born in Asmara, Eritrea, Saleh moved to Italy after high school to pursue a university degree. She lived there for ten years, earning a master's in economics from the University of Bologna, before coming to the U.S. to teach in Minneapolis." And then, San Francisco. ^_^

Competition of the week: a week in Zanzibar (UK entrants only), flying business class. To be precise:

The winner & a friend will get:

* Return business-class flights to Zanzibar with Qatar Airways
* Return flights from Zanzibar to Pemba Island and internal transfers from Pemba Airport to Fundu Lagoon resort
* A 7-night all-inclusive stay in a Superior Suite with private plunge pool, sundeck and views across the bay
* Free watersports including mangrove canoe safaris, snorkelling, windsurfing and kayaking 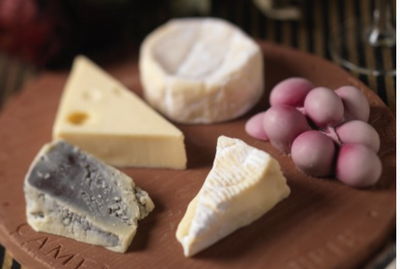 Or, on a more whimsical note, how about a chocolate cheese board? Yep, it's all chocolate, lovingly crafted to resemble anything but. =:D They also make a variety of other designs, including daily vegetables. Anyway, they're running a little competition to win one of their chocolate cheese boards, as well as a real cheese board from Godminster.

From the "color me very skeptical" department: Jonathan Betuel's apparently wanting to reboot The Last Starfighter, as a VR-augmented TV series. "The TV series would not continue the original plot of The Last Starfighter, which centered on a video game fanatic who is thrust into outer space in the middle of an intergalactic war. The TV show will be a serialized story about alien law enforcement, and 'instilling a moral code.'"

Coo! Looks like the WebKit's efforts on improving JavaScript performance, and the CPU design team on Apple's processors, are paying off: running Sunspider 0.9.1 on Hazel gave a result of 140ms. The iPhone 6S Plus apparently weighs in at around 220ms. =:D As for the rest of its internals, Anandtech has taken a look, with some surprises beneath the surface, such as a custom flash controller, based on their MacBook work. And on the camera front, here's a comparison of all iPhone models, from the original iPhone, to the 6S; click on a slice to see the full image. It's quite fascinating to see how the quality's evolved so far in just eight years. (Is it mean to be amused by the hand-wringing of many insecure guys over the new rose gold option, fretting whether liking it makes them any less manly? =:)

And how about the making of pasta shells? ^_^