Admittedly, the title is a bit baity, but - it's actually sort of justified. =:) The Vagus Nerve: A Back Door for Brain Hacking. "Vagus nerve stimulation, or VNS, got its start in the 1990s, when Cyberonics, of Houston, developed an implanted stimulator to treat particularly tough cases of epilepsy. That application was just the beginning. Researchers soon found that stimulation had the potential to treat a variety of ailments, including painful neurological conditions such as migraine headaches and fibromyalgia, inflammatory problems such as Crohn’s disease and asthma, and psychiatric ailments such as depression and obsessive-compulsive disorder."

The catch? We're still working out how exactly to send the signals required to have the desired effects, with one featured company thinking they've made some significant progress, notably how to deliver exactly the right kind of pulse, and using only an external device the size of a phone, which you'd hold briefly to your neck. "The idea that this single nerve can have such a profound effect on so many different organs and ailments might seem far-fetched. To understand the underlying logic of this treatment, consider the anatomy of the vagus nerve and where it connects to the brain. The nerve terminates in the brain stem at a structure called the nucleus tractus solitarius. “The NTS is a junction in the brain,” explains Milton Morris, who until recently was senior vice president of R&D at Cyberonics. From there, the vagus nerve’s signals travel to other important brain structures with bewildering Latin names, such as the locus coeruleus and the dorsal raphe nuclei. Most of these structures produce neuro transmitters—the chemicals brain cells use to communicate—that have an inhibitory effect, decreasing a neuron’s excitability. That anatomical perspective clarifies how VNS produces its therapeutic benefits. An epileptic seizure, for example, is the result of waves of excitation sweeping through the brain. Deploying the brain’s natural dampers should—and apparently does—cause these waves to peter out. Many of the ailments now being investigated by vagus nerve researchers likely involve similar overexcitation, or oversensitivity. “Epilepsy might be just one end of a spectrum,” Errico says." 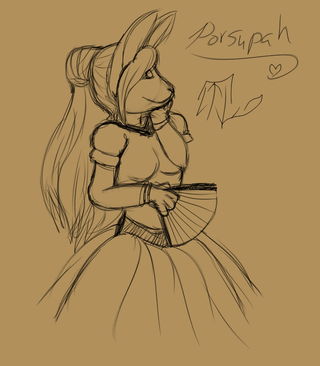 w00t! Another quick freebie sketch! This time, by /u/PrincessAloria. ^_^

Food recommendation of the day: M&S' soft-boiled Scotch eggs. Not only with a nicely soft-boiled yolk, but the meat itself is a touch better seasoned than most around. Easily the best supermarket Scotch egg I've encountered. (Note that you won't find them with the other Scotch eggs in the "Picnic" section, but with the other "Gastropub" items)

With oddly good weather on Thursday, I naturally had to take the opportunity to go rabbiteering. But that tends to pick up more as the afternoon wears on, and I wanted to be outside sooner - and so, walked there instead. It's a very pleasant stroll, going up and down a couple hills along the way, leaving the shirt back soaked, and me both tired and delighted. ^_^ No notable shots from the session, unfortunately - most of the buns were staying "inside", and those out were mostly content with just enjoying a snack or being flopped out. The black bun of late reappeared, though, and again didn't mind me being there at all, although when they crossed the road back toward their home warren, they did choose to cross a bit further away from me. Ah well. I'm pleased they don't consider me too much of a threat. ^_^ (Must remember to bring more water, though - I finished off the 500ml toward the end of the afternoon, but by the time I got back home, I polished off a few pints of water and diet cola over the next couple hours)

rav_bunneh has some ponderings on the progression of human society through from our current position.

lupestripe may wish to take a peek, but obviously, you're all welcome. ^_^

Music video of the week: Hozier - "Take Me to Church". Not an easy one to watch by any means, given the theme of homophobia. Excellent track - probably best listened to without the video, perhaps, as that grabs one's attention away from the music.

For better or for worse, Discworld is closed. "Terry Pratchett’s daughter Rhianna has brought down the curtain on her father’s Discworld novels, declaring that she will not write any more herself, nor give anyone else permission to do so."

It was widely reported that Hot Topic had bought ThinkGeek, but in fact, they were gazumped by GameStop, beating the earlier $122m offer with $140m, plus a penalty fee due to Hot Topic.

TIL that whilst the Mexican peso does offer 5, 10, and 20 centavo coins, in practice, they're rarely used. Going even further than the Australian model, prices apparently tend to be in multiples of 10¢, with totals rounded up to multiples of 50¢.

If you've been considering some furry jewellery, how about a torc or bracelet from the Crafty Celts? Plenty of choices, though sadly, not including any leporines. Elegant, and quite affordable. (And as for leporines, they replied to my enquiry! "We get asked occasionally for that, so maybe one day. I can picture it in my head, which is a good indication I can carve it. However, I am currently just trying to hang on for the ride with the swell of popularity we are experiencing because of Vikings! Stay tuned!")

I had to plump for a Kindle copy of Really Terrible Bible Stories vol.I: Genesis, by Dana Hunter. "Every day, worldwide, people hand a book to children that's filled with graphic adult content. It features genocide, incest, murder, rape, animal sacrifice, slavery, and more. And that's just the stuff the heroes get up to in the first few chapters."

In various news: Met Police use fake cellphone base stations, capturing the device identities of anything within tower range - and needless to say, for all the police's blithe refusal to comment, they're by far from the only purchasers of such devices, freely available commercially; the awkward birth of Moon River; and research demonstrates TV transmissions could be used for civil radar purposes. 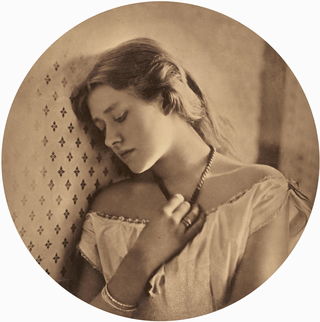 Seeing that Julia Margaret Cameron will be receiving a major exhibition at the V&A, I noticed a link to this portrait by her. Is that not a gorgeous piece of work? "Cameron is one of the most celebrated women in the history of photography. She began her photographic career when she received her first camera as a gift from her daughter at the age of 48, and quickly and energetically devoted herself to the art of photography. Within two years she had sold and given her photographs to the South Kensington Museum (now the V&A) and in 1868, the Museum granted her the use of two rooms as a portrait studio, likely making her the Museum's first ‘artist-in-residence'."

So, Apple Music finally got announced. I still don't know if I can be lured into a subscription, but I'll certainly take advantage of the three month trial - Beats One would seem to have some real potential by itself, aside from the on-demand catalogue represented by the iTunes Store. It's at least interesting. Full support for Audio Units in iOS will be welcome too, though even as is, iOS is a veritable playground for music development, with a wide array of full-featured synths and sequencers, linking through Audiobus, and controlled by apps like Liine's renowned Lemur, originally a standalone device, until the developers shut down the hardware and ported it over to iOS (and now Android too).

It was also very welcome to see the original hope for Swift to be made open source come about. I ought to get into Swift, though to be fair, my current emphasis is more on acquiring familiarity with the intricacies and expanse of OpenGL - hours in the day, and all that. There's quite a lot of little news, reading between the headlines, including that ADC's rolled all the dev programs into one, and that a paid level of membership is only now required for App Store distribution - developing for your own devices can be done with the free level. There are refinements on the App Store, too, including "app thinning", so only the resources required by a user's specific device will be downloaded, reducing the space required.

Syfy has apparently announced that they intend to adapt Dan Simmons' Hyperion as a miniseries. Not, I'll admit, a series I've read, but it'll be interesting to see a bit more intelligent sci-fi on TV, even if of more of a fantasy nature.

So, say you're in the mood for touch of melancholy? Here's just the ticket: Lullaby for a Princess, a remarkably professional pony music video - beautiful and soulful in its regret.

Even for a bunny, these are some seriously impressive ears. Add in the fact he's an angora.. ^_^

A little while back, I linked to an appeal to help raise funds to pay for treatment of a pup who'd been found run over. Here's an update, and it's very happy. ^_^

So, someone's given a RyanAir ticket in his Facebook name, not his legal name. With them demanding a hefty fee to change the ticket, he changed his name instead, so his new passport would match. =:D

It would appear that some good can come of that wretched leporine affliction, myxomatosis: University of Florida researchers find it "can deliver a one-two punch, killing some kinds of cancer cells while eliminating a common and dangerous complication of bone marrow transplants."

Wow, that blood drawing went easily! Just wandered along to the local hospital with the papers the GP had given me, waited all of about thirty seconds, and sat down, right arm with palm upwards. A quick constriction above the elbow, and before I knew it, a tiny prick within the elbow. A few seconds later, and he was labelling two small vials. Providing nothing alarming shows up in the liver function test, I should end the year with all my nails completely standard issue again. ^_^ (The anti-fungal medication in question, Terbinafine, works at the nail bed, so it's got to be taken for 4-6 months in all, for a full cycle, hence the need to ensure the medication doesn't cause undue stress. Its Wikipedia entry is, naturally, about as reassuring as you'd expect =:)
Collapse