So, Kung Fury was released. =:D The roomie, being a backer, had it ready to roll as soon as the moment of release arrived, and lo, it was Chromecast from his PC to the TV, and it was good. ^_^ It's difficult to make good parody or homage, but they managed to fill thirty minutes with all that made 80s action flicks so fantastically cheesy and fun, even if they did take one or two liberties with the level of effects possible then versus now (though the producers of Space Precinct would've surely loved current options. Hi, Triceracop!). Some of the effects were a touch gorier than I would've preferred (particularly in the "origin" sequence), which jarred the playfulness of the whole, for me, but all the same - it's easy to see how this can indeed become a full length feature in a year or two. ^_^

In Bangkok, there's a restaurant with some unusual serving methods: "The chicken is carried out on a silver platter not to the diners, but to a long platform raised a couple of feet above the ground in the middle of the outdoor dining area, and set on one of the several metal catapults. A waiter riding a unicycle makes his way to the platform and stops a few feet away of the loaded catapult. As he struggles to keep his balance and concentrate on what comes next, the edible projectile is set on fire and launched from the medieval artillery device. The chicken soars through the air and most often than not lands on metal skewers the waiter holds in both his hands, in his mouth and on his head."

I was rather surprised to hear from the author of one of my favorite furry stories, Invasion of the Bunnybots - it will indeed be getting posted to the net again soon. It's remarkable for the sense of progression of the transformations involved - not merely describing the visual changes as one might witness, but also the mental progression, how it might actually feel. I don't know if they've written much/anything else, but I'd certainly hope so. ^_^ 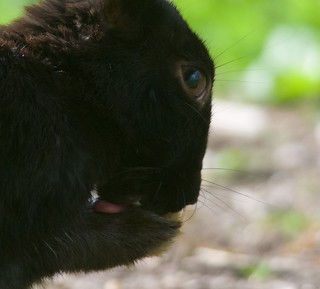 So, who wants to guess who I voted for in Eurovision? ^_^ (And congratulations to Australia's admirable debut!) I was, admittedly, rather disappointed that the UK's entry barely managed to stay afloat - I'd expected it to be maybe in the middle of the running. =:/

One of KS's newsletter project choices looks particularly interesting: smart friendship bracelets. They're programmable, so they're a platform as well as a wearable, and modular too - the intention to offer bracelets that are both genuinely wearable and functional in their own right, and to help bring girls into programming.

If you're considering going along to one of the Doctor Who Symphonic Spectaculars - coming to New York later this year - all I can say is: go for it. The experience of enjoying so much superb orchestral arrangement, all with a full orchestra and choir - the very same people who've been offering us the show's music since 2005 - is quite extraordinary. Not to mention being feet away, at times, from Daleks, Cybermen, mummies, and more.. =:D I was a little surprised that the "key" theme from the Rings of Akhaten wasn't amongst the selections, but then, they have quite a lot to choose from - and the list is good. (Is it a spoiler if I note the closing theme from "A Christmas Carol" is included? Easily one of my favorites of the series - a fantastic episode, to boot. So much love, yet so much heartbreak)

I was sat down by one of my rabbiteering spots, on an old concrete traffic barrier behind the sturdy, locked metal gate (which you can walk around), and two buns came quite close, perhaps 10' away, looking at me and the gate. One decided to head off elsewhere in the small field, whilst the other came a little closer, then, in preparation for heading under the gate, gave their hands a good grooming first. And so, I show to you - the bunny tongue. ^_^

Being watched like that, in a relatively intimate moment for a rabbit, apparently prompted them to share their thought on such an intrusion.


Here's a good excerpt from a book on how RIM/BlackBerry met - or didn't - the fruity newcomer to the world of smartphones. It takes its time to follow the internal thinking around the iPhone's launch, and their response, the Storm. It's worth a read, as it brings a very human face to the whole saga - the actual people involved, and helps explain why things happened as they have, from multiple perspectives.

Meanwhile, today's intentional piece of geek humor is provided by RFC6919. "RFC 2119 defines a standard set of key words for describing requirements of a specification. Many IETF documents have found that these words cannot accurately capture the nuanced requirements of their specification. This document defines additional key words that can be used to address alternative requirements scenarios. Authors who follow these guidelines should incorporate this phrase near the beginning of their document: The key words "MUST (BUT WE KNOW YOU WON'T)", "SHOULD CONSIDER", "REALLY SHOULD NOT", "OUGHT TO", "WOULD PROBABLY", "MAY WISH TO", "COULD", "POSSIBLE", and "MIGHT" in this document are to be interpreted as described in RFC 6919."

Tyrrell's have quite a novel seasonal flavor of crisps out: mint and butter. It sounds wholly unlikely, but it's genuinely delicious - they do indeed have a definite buttery taste, with a gentle, light mintiness to them. Kudos to them for attempting such an unorthodox flavor, and succeeding!

And here are two young buns exchanging a secret message. ^_^

the task is simple.

choose a number between 0 and 100 and suply a short justification for your choice.

the winner is the person whose number is closest to two-thirds of the average of all the entries.

for example, three entries are submitted : 20, 30 and 40. the average is then 30 and the winning entry is 20 being exactly two-thirds of the average.

in the event of a tie, the prize will go to the person who submits the best justification. professor thaler's decision is final.

send your guess to ThalerChallenge@ft.com