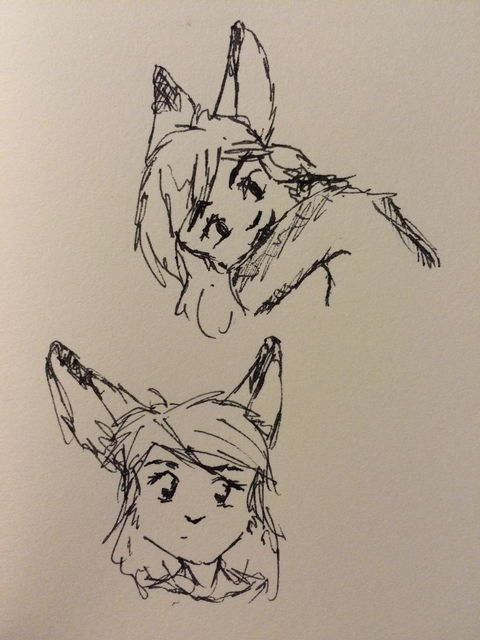 Is anyone else going along to the Royal International Air Tattoo this year? Whilst I'm hardly a military sort, there's no denying the magnificence of the aircraft involved, appearing from all around the world - and Friday? Sees the Vulcan. =:D Why, yes, I think I will shift my Nikkor 200-400mm f/4 rental to include that day.. (booked back in February, taking advantage of LensesForHire's half-price offer that month)

And, is anyone going to Confuzzled? If they're selling the con t-shirts separately (rather than only as part of a registration package), might someone be willing to pick one up for me?

rav_bunneh surprised me the other day with a couple pen sketches, which.. I really like. Whilst I certainly know the second very well (a bit too well =:), it's the first that especially sings to me. ^_^ He's a talented bun, even if he keeps trying to deny it.

Here's a sequence of frames from a panel on "how to draw anatomically correct furs". But.. well, it's not in the least bit serious. =:D (Needless to say, absolutely NSFW, although you could justify it as being educational. =:)

Finally! A werewuf who isn't all growly all the time! Here's a very well produced - and rather adorable - student thesis animation short, Dirty Paws, by Karina Farek.

The Muppets are returning to TV! Apparently, the new pilot "received a standing ovation when it screened for ABC executives a couple weeks ago".

Apple recently made an interesting acquisition: Coherent Navigation, whose iGPS work uses multiple satellite systems to provide ~10cm positioning accuracy with high jamming resistance. The question, of course, is: why? Simply to improve upon the current AGPS in use, or does it hint at something unknown, like the "Apple Car"? It could easily be simply the former - it looks like Coherent was a very small company of only a few people, so it's unlikely to've been a tremendously expensive purchase.

From the "Well, That Just Happened" department: have you ever seen a duck stampede before? You have now.

If you're at all interested in films, it's worth checking out Apple's Meet the Filmmaker series of podcasts. They're around 30-45 minutes long, and the director or cast have free rein to talk about the film in question - you'll find the directors or cast of films like Big Hero 6, Age of Ultron, Interstellar, Better Call Saul, and Shaun the Sheep (the director, not the cast). They're very chilled out, and as the audience area in Apple Stores are quite modestly sized - a matter of a few dozen seats, usually - it's a lot cosier than you'll find in a talk show. (Indeed, they're worth going along to in person, if you're near one of the flagship Apple Stores - always free, just make a reservation and turn up a good half hour ahead of time to be in with a good chance of being able to sit. They're fine with photography, just no flash) Speaking of which, I see Thursday holds a potentially interesting fashion discussion, "Join Kinvara Balfour and award winning fashion designer Christopher Kane as they discuss his work", followed by Mr Godley (10cc, Godley & Creme), "Join Kevin Godley as he discusses his ebook SPACECAKE, which chronicles the part work, part play, all real interactive misadventures of the ex-10cc media masochist and his journey through the worlds of rock music, video and technology." Think I might amble along for both of those.

So, turns out a double of Heston's Earl Grey & Lemon Gin, a double of Thornton's, a tiny dash of home-made cinnamon vodka infusion, topped up with mango & apricot smoothie and diluted with milk, makes a very palatable cocktail. =:9 (I'd recommend the gin to non-gin lovers, too - it's rather unlike most, teetering on being a sort of dry-ish liqueur)
Collapse