Hatoful Boyfriend, the pigeon dating sim, is on sale until May 11 2015 - 75% takes it from £6.99 down to £1.74, for OS X, Linux, and Windows. Or, there's the Collector's Edition, which apparently adds the soundtrack, a comic, wallpapers, and yearbook. (The usual prices are $10 and $15) "Congratulations! You've been accepted as the only human student at the prestigious St. PigeoNation's Institute, a school for talented birds! Roam the halls and find love in between classes as a sophomore student at the world's greatest pigeon high school. Finding happiness won't be easy, but it's not all academic - there's always time for a little romance in this delightful remake of Hato Moa's popular visual novel / avian dating sim Hatoful Boyfriend!
Please Note: No birds were hurt in the making of Hatoful Boyfriend. In fact, many found love."

A luscious 3D platformer from the minds behind Banjo-Kazooie and Donkey Kong Country wanted funding, and got it in spades: they were hoping for £175,000 for Yooka-Laylee's creation, and have £1.4m with 40 days to go. =:D

On "taking action", this Wondermark comic is perfectly on the money. Perhaps worth bearing in mind on Thursday, for UK peeps. =:)


An interesting surprise just hit the App Store: Grim Fandango Remastered. I never got to play it the first time around - and this time, it's cheaper too, at a princely $10. 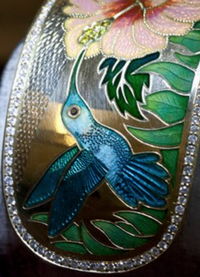 Saturday's film was a random selection - I hadn't heard of it, so we went for it. =:) "The Admiral: Roaring Currents" is a Korean drama from the 15th Century, telling the tale of a famous battle that saw 12 battleships defend against the invaders' 330.

Hm. The thought occurs that the Clapham South deep shelter tour is on October 8 2015, by which time I may be a few thousand miles away. Still, not such a bad problem to have. =:) If I do wind up having to miss it, and if it's transferable, would anyone be interested in buying the ticket? It's quite a rare opportunity. ^_^

This Dinosaur Comic? Yep, it's true.

Competition of the week: an absolutely outstandingly beautiful bracelet, worth £75,000, and apparently open to entrants worldwide.

From the "it seemed like a good idea at the time" beer naming department: Flaming Ass Owl, an Imperial Porter, at 9.2%. Really rather good! The malt's been smoked, and a touch of spicing added too - but despite the monicker, actually with a gentle touch.

Drink of the day: 3 shots Thornton's, 2 shots Juniper Green gin (though any would probably do), 1 shot Aqua Riva tequila (best to use that, if possible), and a dash of Boudin Curaçao, plus a bit of ice. It's like the best chocolate ice cream, all molten. Very dangerously easy to drink. And fortuitously, discovered on Election Night. ^_^
Collapse