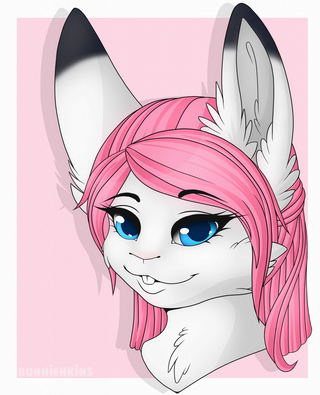 I've had a few jobs now, and one thing continues to puzzle me - why do so many folk conceal their salaries? Even when employed at the same company, so there's no risk of poaching, that holds true, and this puzzles me. Could someone explain?

A couple weeks ago, /u/xRabbitfluffx offered a couple free portrait slots, and I was lucky enough to be chosen. And.. wow. I'm absolutely delighted. ^_^

The Muppet Show might be heading back to TV. =:D

Does anyone else maintain an ad-free Flickr Pro account? I'm a little confused (which is not unusual), as I just saw a transaction for Flickr come through - what looked like a two year payment, as is indeed currently selected, but paid to me. Don't places like Flickr tend to take money from people? The next payment is due in December, but I notice that old card expired this month - but still, I'm not sure why they'd wind up giving me money.

Yay! Only one week to go until the complete (save for Vivian Stanshall) Bonzo Dog Doo-Dah Band play again. =:D They're not very serious. And damned talented. What's not to love? ^_^ (If the name isn't familiar, their legacy may be, responsible for the track which another band later used as their name, Death Cab for Cutie; a well-known arrangement of the Monster Mash; and The Urban Spaceman, amongst quite a lot else)

Watched "Seven Psychopaths" the other night.. egad, now there's a cheery little flick. ^_^; IMDb's algorithms certainly got it right with their "also liked" headlining "In Bruges". I'm not quite sure what to make of it, actually.. it was well written, with some interestingly complex characters, particularly Christopher Walken's, but the sheer bleakness prevented me from being able to immerse myself in it. (I was, needless to say, very apprehensive when one character appeared, holding an adorable white rabbit, fearing for the worst. The buns, thankfully, were all safe throughout) I think I'm pleased I've seen it, but I doubt I'd be able to watch it again. Admittedly, that aversion holds true even with Breaking Bad - I've seen a couple episodes, and I'll certainly acknowledge it's excellent TV, but.. oh, so desperately bleak. (And bear in mind, I admire Chris Morris' work, even including Four Lions =:)

lupestripe really needs to see this series of SoftBank ads that 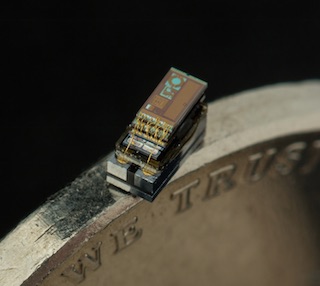 You've seen computers touted as being small - Raspberry Pi, Arduinos, and more. Those, by comparison, are positively gargantuan versus the University of Michigan's Michigan Micro Mote. Here it is on the edge of a coin. =:D And it is indeed a genuinely fully-fledged computing device, with solar cells able to power the device off even indoor lighting, and a radio for communications. As you might expect, such a small device has commensurately tiny power consumption: the 1x1mm solar cell produces 20nW of power, with the device's idle consumption reduced to 2nA (ie 0.002µW). The processors themselves? Cortex M0! Yes, ARM again. Yay!

Dinner on Sunday turned out well. ^_^ It was a collaboration between the roomie and I - he bought the beef joint, I landed a few heavily marked down vegetables (at the right time, 10% of usual price. And I do mean of, not off =:), and I sort of kicked it off with marinading the joint. I played it by ear, basically wanting something peppery, potent enough to make a good marinade, without being in the foreground. I wound up tossing together lots of water, a bit of oyster sauce, plenty of Berbere mix, a few teaspoons of Dijon mustard, some basil leaves, plenty of grindings of Tellicherry black papper, a little fish sauce, a pinch of asafoetida, a little ras el hanout, and a bit of crushed garlic. Not a simple mix, but one that I intended to head concertedly in a peppery direcion, with loads of body to back it up, especially against that robust meat.

It proved.. good. =:9 I actually wound up simmering it for a little while, with the meat in, to ensure the flavors would circulate, given we only had a few hours until dinner, then popping it into the oven to finish off, along with some parsnips and potatoes. Meanwhile, the vegetable assortment was sequenced - cauliflower first, then Brussels, then tenderstem broccoli. The gravy? Well, I hadn't actually originally intended it, but the marinade was tasty, so I simply thickened it with rice flour, nothing more.

Here's rather a nice prize bundle: NI Komplete 10 plus a Kontrol S49 controller. Open worldwide, except "Americas" (would they mean literally all of North, Central, and South America?). Fun tie-breaker.. "If you could have control over anything, what would it be and why?" Or.. how about a 17-day tour of Vietnam and Cambodia, flying business class on a 787?

Programmer humor. Probably just as well they cut away before demonstrating a destructor. =:)

So, we watched Skyfall - the roomie's second time, and my first. Quite a lot better than I'd feared, actually, with a good deal more ambiguity of moral purpose than I'd have expected of a Bond film. As exciting a production as ever, of course. And I was, for once, delighted to see a solidly capable woman do rather more than survive, in the form of Eve. (Though, a little sorry to see even Bond can't escape tropes like visualising where a device is being "hacked" from.. what? Arg! Computers aren't exotic toys now! Can't we have a touch more realism even now? But then, there was the Tube train whose lights remained firmly illuminated even after departing the tracks, with nary a flicker.. *cough* I know these aren't major issues within the plot, but can't we be rid of these unnecessary bumps in the plot? Realism can even pay off, though such seems to be held with some disdain in Hollywood - consider the swordfight at the clifftops in The Princess Bride. They didn't need to genuinely choreograph the scene, but they did, and wound up with a portrayal whose verisimilitude affords a certain authenticity elsewhere, even when we know it's all a grand tale)

All a bit weird. ^_^; I recently rediscovered Swords & Sausages, and from there, Nine to Nine, and thus its origin, College Catastrophe, which began around 2000 - but, the artist later reworked many of the earlier strips. So, I'm currently looking at a strip from 2011 10 30, which apparently originally debuted on 2002 05 19. And despite having been active on LJ since 2003, I had no idea they were even around! Bah.

Just before the guest - a mutual University friend of myself and the roomie - arrived, I dashed out to indulge in some rabbiteering. And.. caught this moment. ^_^

Friday afternoon saw a very special surprise. Some time ago, I backed the Scandinavia and the World Kickstarter - and I now have the SatW version of me to share. =:D (Even better, I'll be animated later on, in the dance and Royal Ball!)


It does feel rather immodest to promote these depictions of myself, but.. they so resonate with me. ^_^
Collapse