Well, this is proving to be an interesting year. =:) I've just signed Momentary up with a press agency, for newspaper and magazine publication. Now to see where this leads.. and indeed, where my buns wind up. ^_^ I'd had this in mind for a while, but never quite got around to it - but with Easter upon us, I thought it'd be worth seeing if some editor with exceptional taste might want an eye-catching bunny photo. ^_^ 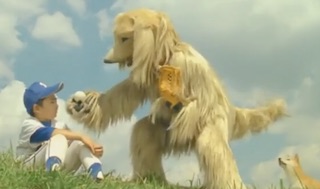 Here's a rather impressive canid fursuit courtesy of a Japanese advertiser. Although I still have a tremendous weakness for the Anabukin-chan spots. =:D The outcome is a Japanese play on words, apparently, as the song translates along the lines:

A ten minute short of some possible interest: Stop Calling Me Honey Bunny. ^_^ (Also note the competition running until April 20th, to win a gift card for $350 with ChezNoir.ca, good worldwide)

I'm very pleased to see the success of the Iranian nuclear negotiations. I'm hopeful it'll prove pivotal in securing a much better life for Iranians in general, even if the theocracy remains firmly in place.

We missed the first UK political debate last night - how did it go? I'm not much for such spectacles - all too often, they're merely PR opportunities, rather than involving any element of debate. And as we've seen with the current abominable bunch, what they claim as policy need have little relation to what's actually carried out. (I see from the Guardian's coverage that Farage remains as much of a media sweetheart as ever. I'd've thought his "lovable fascist" schtick would've gotten old for even reporters by now) [ETA: I find

poliphilo's summary of each leader rather delightfully wry]

I must point out Closetspace, a comic

jenndolari has been working on for several years now. ^_^ The overall feel is of a superb soap opera, although I'm worried that might sound less like admiration than withering criticism. ^_^; What I mean to convey is that whilst it's essentially a slice-of-life saga, there are also comedic exaggerations, and well thought out melodrama as well. There are some wonderful laughs to be had, and I shed some tears along the way - for lo, didst I read the entire strip from start to present over the course of a couple days.

jharish? I only sort of re-stumbled upon it while browsing through my local comics & cartoons directory, and noticed two strips in a folder by themselves, from 2009) The storyline kicks in fairly soon, commencing with an unexpectedly powerful challenger to Mistress. There's a lot more, but I'll let anyone interested read on and enjoy it for themselves. It's a grand adventure indeed. =:D It runs twice a week, and has been running for about six years - so, good if you've got some time spare. =:)

A quite wonderful music video: Freewave (ft. RainSnowHail) - Glittershell (Coming Out of My Shell). It's firmly in that category of music videos that tells a story, quite literally in this case.

And then there's Morcheeba - Enjoy the Ride, as

hangkat pointed out. =:D Now to seek out an HD version! Just loving the mellow nature of the track, so well illustrated in its video.

Here's quite an appealing competition (UK entrants only) - design a new pizza for Pizza Express. The winner gets a two night break on the Amalfi coast, their pizza on the chain's menu, and £10,000 in their bank account. Not too shabby. ^_^ They've even done a really nice job on the competition site, adding the ingredients in turn, showing what it'll look like thus far, with plenty of choices of cheese, meat, fish, vegetables, sauces, herbs, and so on. Be ready at the end, where they want you to name your creation (you can submit up to five in total), and a few lines about the inspiration behind it.

If you recall Judge Minty, the rather professional fan production set in Dredd's world, you might like to give Prelude to Axanar a try. It's another fan production, made for about $70,000 for the twenty minutes it currently runs, set in ST:TNG's universe. 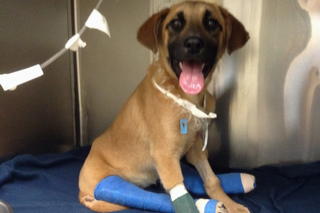 "Last week, on his way home from work, Caleb passed a puppy lying in the middle of I-610. He thought it was probably dead but saw it raise its head, so he turned around and went back to get it. There happened to be a dog groomers right there and Caleb found a customer to help him get the puppy off the road. They took the puppy to the customer's vet. She had been hit by a car and has both back legs broken, and maybe more." The surgery was beautifully successful. ^_^ With frightening costs involved, they're understandably seeking donations to help pay the bill, which is looking like it'll wind up in the vicinity of $4K or so.

So, this tale begins as one might expect of /r/talesfromtechsupport.. but, well, there's more. And in a good way.

The definitive history of Max Headroom, live and direct.

Fancy going down some giant slides in London this summer?

Fangs is an Elite: Dangerous webcomic, taking carefully choreographed screenshots from the game, processing them into a comic-style pure black & white, and overlaying the script. Rather well done.

There's a UK company that makes lenses with deliberately odd optical characteristics, as noted in the info for one of their offerings, the Flare Factory 58: "Each Flare Factory 58 is engineered, crafted and finished by hand in the UK, using salvaged former USSR and East German optical and mechanical components. Since each lens is rebuilt and individually configured, we are able to apply an almost limitless variety of optical degradations depending on your desired look", with dirt options including element separation "creates additional extreme and wild unpredictable flares", cleaning marks "contribute to further flaring artefacts like rainbow fans and grungy texture in the bokeh", and dust/dirt/debris "think dirty Hasselblad waist level viewfinder with bits of crap on the screen". The logo for Dog Schidt Optiks is.. well, appropriate. ^_^; 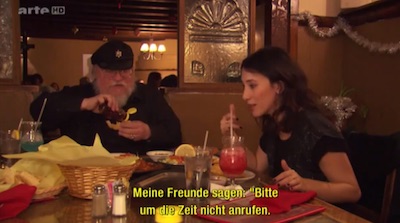 If you're a fan of

grrm's work, you might enjoy this 52 minute segment produced for German TV (hence the burned subtitles), wherein he shows Sibel Kekilli around Santa Fe at night. ^_^ (And I see Maisie Williams will be guesting in the next season of Doctor Who..)

Does anyone know if there's a way of stopping YouTube from autoplaying something else after you've watched a given clip? Indeed, is this happening for everyone else, or just me? I always used to be able to simply watch the clip; lately, though, a sort of countdown circle is displayed at the end, after which something else will begin playing. =:P

The origin of the <BLINK> tag is quite a bit more entertaining than one might expect.. =:D

It looks like the Freddy Mercury biopic may actually, finally, be moving forward, with Sacha Baron Cohen signed to write, produce, direct, and star in it. I feel that could actually work - he's capable of that degree of sheer presence on stage, and we know he won't have a problem with the costumes either. =:) [ETA: nope, apparently SBC left the project two years ago]

Saw "Into the Woods" the other night.. mm, I can concur with the general sentiment of it being a bit muddled. Rather unfortunate, really, given the will was evidently there to make a genuinely sparkling film, but the writing didn't really pull it off. And in disagreement to the stage audiences, I couldn't really engage myself in the musical numbers at all - serviceable, but not much more than that. But then, I wasn't all that taken by Frozen either, which did storming business at the box office, so.. =:/

I noticed there is, apparently, a sequel to the rather superb Donnie Darko, but.. not a terribly good one, if IMDb's 3.7 is anything to go by. So.. has anyone actually dared watch S. Darko? (As for the original, I should note I'll only recommend the original theatrical cut, not the extended director's cut, which restores some desperately unnecessary exposition, and finishes with walloping you over the head with a rather more graphic ending)

Heavens forfend I descend to merely reposting cute photos, but.. this pic from /u/ckabella, captioned "Friend was snoring. Puppy was trying to find the noise." really is quite priceless. ^_^

Charmer of the year: the buyer of this fursuit, who agreed to purchase a fursuit for a given price, only to turn around upon delivery to claim that as they were actually only 17, the seller's sent it to a minor without parental consent, so nya nya nya. This ought to be interesting to follow. =:P

stego_s_aurus really ought to note this Vaudeville t-shirt. =:)

Might someone who's on F*c*b**k be willing to try looking up either or both of James Clark and John Clark? They're likely to still be in Somerset, England. James might mention travel and photography. I'd love to get back in touch with them, but I'm having no luck so far, with their old sites still registered, but with no A or MX records associated, and no other likely matches seem to surface with any amount of searching. =:P (Though if they've more or less vacated the web, I doubt they'd be on that site, but it's worth a shot)
Collapse