I noticed something of a surge of favoriting (?) of Momentary coming in from 500px peeps, and was wondering why, given that photo's been up on the site for a while now. And then I noticed the latest 500px newsletter: Perfect Timing: 21 Split-Second Moments Captured on Camera. And.. there I am, in some fairly spectacular company. ^_^;

It is confirmed by William Shatner: Friendship is Magic. ^_^ (And his nomination for Best Pony? Perhaps not too surprisingly, the most modest of them all, Rainbow Dash =:)

And music video for the week: Only Pony, by OhPonyBoy. Really enjoying the track by itself, but the video seals the deal. (No knowledge of ponies required - it stands by itself as a nifty bit of animation) 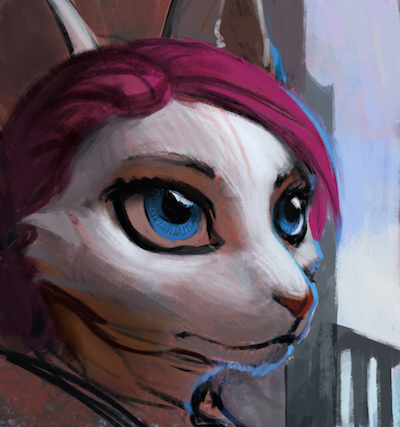 Ludo took it upon themselves to draw a whole slew of critters - absolutely beautifully - and entirely free. I'm absolutely bowled over by just how gorgeous their style is - I'd've been delighted with this as a paid commission, let alone done purely for the fun of it.

w00t! The first OS X beta of Elite: Dangerous debuts on Tuesday. Now I can show the world how much my flying sucks. =:D

If you need a dash of surreality, try this Soyuzmultfilm short, Fru-89. I'm not sure the technology exists to adequately summarise it. ^_^

Quote of the week comes from proud dandy Laurence Llewelyn-Bowen: "My beard makes up for the fact that, quite appallingly, I was born without a big foxy tail to play with."

It's merely an idea that's been tossed out there, with no official backing as yet, but still, it's an intriguing idea: how about free movement between Canada, the UK, Australia, and New Zealand? I'd be all for it - but then, I'm strongly in favor of freedom of movement for people in general.

Hint for UK peeps wanting to read magazines or books digitally, listen to audiobooks, or study languages: check your county's libraries website. Chances are, they'll offer access to a broad selection of titles via apps like Zinio and OverDrive. You'll need your library card's info in order to log in.

If you're in need of a good 3D modeling/rendering application, and aren't won over by Blender's UI, how about clara.io? Entirely free, and is entirely server-side, rendering in your browser courtesy of WebGL.

An iOS game I'd like to point out: Breath of Light. It's got quite an Auditorium feel to it, but crafted exceptionally elegantly, in something of a Zen garden style - even the flow is quite beautifully crafted, complemented by a soundtrack that I'd call "ambient", but that suggests meandering chords that never end. =:) The trailer'll give you a good idea if it's something that'll appeal to you. And on the temporarily free front, Oquonie is a very odd, beautifully illustrated isometric puzzler - grab it now!

For the aviationists: an interactive 3D panorama of a Spitfire cockpit, with everything labelled, explaining its function. Rather nifty! To balance that, how about this posting by someone who's apparently a rising star of food and health quackery, The Food Babe. It opens with (try to wear soft gloves to cushion the facepalming): "A few facts about what airplanes do to your body - When your body is in the air, at a seriously high altitude, your body under goes some serious pressure. Just think about it – Airplanes thrive in places we don’t. You are traveling in a pressurized cabin, and when your body is pressurized, it gets really compressed! Compression leads to all sorts of issues. First off your body’s digestive organs start to shrink, taxing your ability to digest large quantities of food." Though perhaps the article's apex is reached with "The air that is pumped in isn't pure oxygen either, it's mixed with nitrogen, sometimes almost at 50%." But hey, she's the one flying first class to Japan.. ^_^; To her marginal credit, that entry was later pulled, but there is, needless to say, much more where that came from. 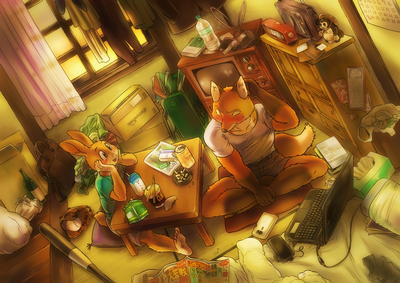 Here's my furry pic for the day: Fox and Rabbit, by Miririn (source, over on Pixiv). Entirely SFW.

What Ridley Scott doodled on his copy of the screenplay for The Martian. =:D

Not long now until The Clangers returns to TV, after a little absence - here they demonstrate eclipse watching. ^_^ (Bah! May be geolocked. Apparently, this FB link is good internationally)

Of course, the weather put paid to any eclipse viewing. =:P Still, I suppose it wouldn't've been total here anyway - through the uniform cloud layer, it wasn't especially obvious that daylight was even being affected. 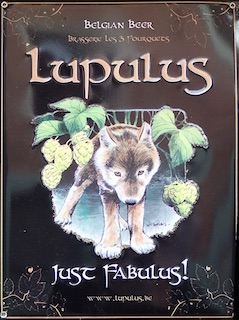 huskyteer spotted on a recent trip to Brussels. ^_^

I see LJ have reworked Scrapbook's photo hosting. I haven't tried it out yet, but I'd be interested to hear reactions from anyone who has. (As is, I mostly host my entries' images on Imgur, other than my photography, usually over on Flickr. One thing I'd like in any other option is filename preservation, which is eternally frustrating on Imgur)

An infographic showing global migration patterns and numbers, by global region. Move over a particular region, and then only flows to and from there will be shown, alongside numbers of people in and out. Nicely done!

Potentially quite handy: Print Friendly converts a given URL into a simplified layout, removing the usual extraneous crud surrounding many webpages. It's also usable as a bookmarklet, reformatting the page you're currently viewing.

Do you have any particular net.radio streams worth recommending? One I'm finding to be quite good fun, on the aforementioned theme, is a French production, ABC Dance Radio, which isn't the usual tedious dancefloor anthems, but more.. sort of dance-y electronica. The stream's over here.

I was interested to realise there's now a "home" edition of Matlab, where the crucial point of difference is simply the license, being strictly for personal use, not commercial or academic. Where the "full" version is £1,600, the home edition is a rather more palatable £102, with additional toolboxes available for £30 each. That said, I think I'd still be cautious of using Matlab in a production development environment - it's a terrifically powerful tool for prototyping, but it's not then particularly translatable into deployable code.

The local buns continue to thrive, I'm delighted to report. ^_^ There are currently about three spots along my rabbiteering circuit where I spend time, and the one in a bit of a dip between two fields, along a footpath, is perhaps the one with the most potential, photographically, with good light, a complete lack of obstructions, and even that angle works in my favor, making it that bit easier (though still a challenge, as ever) to acquire good focus, with vertical movement translating to less of a range of distance. The buns there remain as nervous as ever, but it's simply a matter of approaching from behind the tree cover slowly - they'll usually be fine with that. With two tinybuns amongst the six or so I'm seeing there now, perhaps there'll be a wonderful binky or two to be had sometime. ^_^ (I can also report that rabbit sex is.. less magical than depicted anthropomorphically. When consent's finally been granted to the male, it amounts to a couple seconds of.. well, rapid vibration, and then it's done)
Collapse