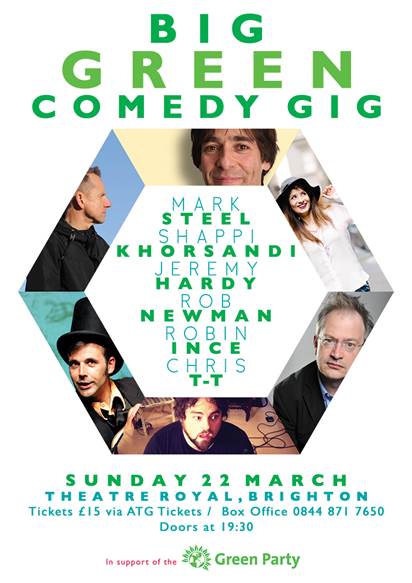 It's not exactly local to me, but it's a very tempting line-up: a comedy evening in Brighton, including the likes of Mark Steel, Jeremy Hardy, Rob Newman, and Robin Ince, all for a princely £15. =:D That's over at the Theatre Royal, on Sunday, March 22nd.

Here's a collection of interviews with a wide variety of personages and celebrities, covering quite a spread of talents and backgrounds, including the likes of William H Macy, Annie Lennox, Ron Perlman, Terry Gilliam, Neil deGrasse Tyson, and Rob Reiner. Audio only, around 20 minutes long each.

Want to see how a jet engine works, with beautifully produced animated cutaways? There are several more from the same guy, including what makes tarantulas tick, how speakers make sound, and how LCDs work. Educational, and gorgeous to boot.

Quite a fun, simple music video: Flight Facilities - Down to Earth, starring a dancing Sam Rockwell.

I've listened to the album quite a few times, but the Tron Legacy soundtrack easily remains one of my absolute favorites - this version came from vinyl, sampled at 24/96, mastered with apparently a lighter touch on the compression (in the dynamic range sense) than on the digital releases. Really comes into its own on something like The Game Has Changed, with that deliberate synth distortion playing against the orchestra. I have very boringly average hearing, and hardly any special setup - just Sennheiser HD25-1 II headphones fed straight from the MBP - but wow, that album's just so intensely immersive. =:D (Love the film, too)

I may have a new favorite TV chef. ^_^ Have a look at this recipe for a cauliflower pizza, presented by Laura Miller. (Oh, what a voice! <3)

For Bay peeps: the forthcoming two Midnites for Maniacs screenings are going to be especially fun. ^_^ First, on Fri, March 6, 7.30pm at the Castro, is a DCP presentation of the regional premiere of the director's cut (with a longer, darker ending) of The Little Shop of Horrors, followed by eXistenZ, plus an array of Cronenberg trailers, on 35mm. Then, on Sat, May 23, at 7pm at the Roxie, a Jeunet/Caro double bill of Amélie and La Cité des Enfants Perdus, both from 35mm.

I'm not given to promoting Buzzfeed links, but - these bits of Andre the Giant trivia are quite remarkable. I hadn't been aware William Goldman actually wrote the part of Fezzik specifically with him in mind. And the photo of him standing next to Arnold Schwarzenegger is quite an amusing contrast. =:D

A fun TG TF sequence: Multiply, by Snaketrap. Entirely NSFW, although maybe safer in some workplaces than others. =:)

Temporarily, the Kindle editions of Post-Human, books 1-4, are free, as is book 5. [Edit: that's over now, unfortunately]

And similarly, the iOS version of classic platformer [And] Yet It Moves is currently free, until 3pm GMT on Friday.

I was curious as to the origin of the term "the Streisand effect", and was impressed by its magnitude. =:D It arose from her attempt to remove an aerial photo of her home, on the basis of invasion of privacy. However, as the Wikipedia entry notes, "before Streisand filed her lawsuit, 'Image 3850' had been downloaded from Adelman's website only six times; two of those downloads were by Streisand's attorneys. As a result of the case, public knowledge of the picture increased substantially; more than 420,000 people visited the site over the following month."

Here, have a truly demented blend of two tracks.. Stayin' Alive in the Wall. Yes. ^_^

lupestripe pointed out a relatively new comedian, Nish Kumar, and so I went sniffing around YouTube - and yep, here's seven minutes courtesy of the BBC. Very funny stuff.

Rather a curious potential acquisition by Apple: soft synth developers Camel Audio. Presumably their work'll form part of a new version of Logic and/or Garageband?
Collapse