Here, have a very short poem, Wolf Break, by

Some jobs might, at first blush, not seem so striking - but, this account brings the author's role into beautiful relief: I'm an art museum night guard.

It's only a lab prototype for now, but here's a potential revolution in lenses in the making. Rather than the way we've always fiddled with light, using the surfaces of lenses to refract light at various angles to bring it to a focal point, and use other lenses to correct for the different angle of refraction at different wavelengths, making for potentially quite heavy assemblies, this.. well, probably easiest if you just read it. =:D But, we could, possibly, be looking at a single, flat metasurface able to both bring the light to focus and for many wavelengths. It's very cunning stuff indeed, with profound implications throughout optical industries. (And yay, my submission thereof on HN hit the top ten on the front page, too =:)

You need to check out 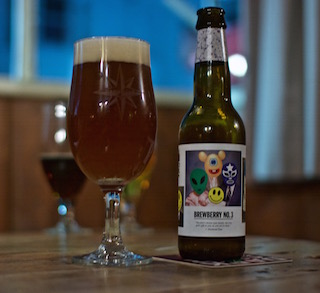 I love beer. Always have. ^_^ Here's one I tried after last week's rabbiteering (unfortunately, not much to show for it - several times, brief chases broke out, only for them to dive immediately out of view, plus a few moments missed through lousy focus), from a Danish outfit, To Øl (Danish for "two beers"): BrewBerry No.3. (For beerhounds: one of the brewers founded Mikkeller) It's an awkward one to describe, and I'm not much good at that to begin with, but it's sort of like an Imperial IPA, as if brewed by Belgians, with a hop nature that's positively warmly floral, not sharp. Really quite unusual. Even at its unfortunate price, I'd recommend it to any beer explorer.

Here's an interestingly simple to use iOS formant analyser over on GitHub. (Also available pre-built from the App Store) Tip: to build it, ensure you open the xcworkspace file, rather than the xcproject - this will avoid the linker griping about not being able to find a particular CocoaPods library. I'll want to compare the results against Praat, though.

Some furs I know are sort of into aviation.. here's rather a good article combining photography with the stories of some of the notable figures in the field's development.

Cocktail du jour: a variant on Long Island Iced Tea. ^_^ A double of Heston Earl Grey & Lemon gin, a single of Whitley Neill gin, a third of Curaçao, and a single of Aqua Riva, topped up with equal parts of diet cola and Fever Tree elderflower tonic water, and a good bit of ice. The first gin is quite floral, relatively mellow, whilst the latter is much spicier - that's really the key to this. You could probably substitute something like Bombay Sapphire comfortably for the latter, but the former's rather much its own thing. The tequila needs to be something similar - very smooth, but still pronouncedly tequila, rather than, say, the fantastic lightness of Patrón Silver.

Or, a slightly simpler variant: equal measures of said Heston gin, Whitley Neill, and Plymouth Gin, topped up with Fever Tree elderflower tonic water. It's a veritable symphony! All I wanted was to see how the three might play with each other. They're all gin, but all of such different natures.

(I may try tossing the Jenever into a future concoction.. that's quite a different character still, especially with this bottle having been open for about a year)

Surely there's someone else watching The Fixer? ^_^; Still, I have to say, ep.5 with Balloonin Marvellous was one of the more spectacular episodes, in a very good way. It opened with a struggling party/events company, with the owner's designs and arrangements.. rather haphazard, complicated, and a touch on the chintzy side. But with a boost in confidence achieved - ye gods, what a transformation! Designs that a high-end event can be proud of, whatever the setting.

Open to: All, detailed results viewable to: All. Participants: 15

How long do you want your bathtime to be?

Will your bath be foamy?