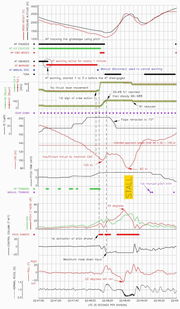 patch_bunny would like everyone to know that MFT3K ep.4 is now out. Enjoy "Eliminators"! ^_^

I recently stumbled upon a particularly fun webcomic, Rasvaar, which started in 2006, and apparently wrapped up in 2014. It's got a playful sense of humor, and some very fun characters. It begins with a fox who sort of semi-accidentally winds up either running away from home, or embarking on a roadtrip, to escape a family he knows won't accept him being gay. It's lacking the angst you might expect of such a start, though - it's more of a comedy than an earnest slice-of-life.

New Year? A relatively peaceful entrance here, actually. (I'll try harder next year =:) The roomie/landlord/old Uni friend and I simply enjoyed a lengthy array of cider, beer, and wine, with Jools Holland's Hootenannay kicking in around midnight, with so many great acts - it's a genuine celebration of music, with everyone there simply because they're damned good, not because they have a new tour/book/album to promote. And of course, there were the London fireworks, as spectacular as could be expected, rounded off with a mini concert by Queen, now fronted by Adam Lambert, who actually does a pretty good job of it. Nobody can be Freddie, of course, but I saw a good part of that attitude and spirit. No question, I'd enjoy seeing them live, in person.

On the topic of aviation incidents, here's one set of data from a close call, showing the entry into a stall, and mercifully, recovery from it - with not a lot of height at play, as the craft was close to landing. More details can be found in the incident summary over here.

Here was quite an amusing little moment from a rabbiteering run last week. ^_^ I'd spotted a squirrel not too far off, who wasn't hurrying away, but rather, taking their time gradually travelling along the branch, eventually meeting another. After exchanging squirrelly greetings, the first then basically continued walking along the branch, right over them. So, they did just what you'd expect - nudged themselves forward a bit, poking out from underneath. ^_^;