And so Philae fell into hibernation, having completed a broad range of experiments for ing its primary science suite, managing to transmit the results back to Rosetta before its slumber. Rosetta will remain in orbit as the comet loops around the Sun in August 2015 - it's possible that at some point, Philae will receive sufficient illumination to wake up again. As for the landing - as you've doubtless read, the initial puzzlement over the first data was due to the fact Philae actually landed three times. ^_^ The problem was that the thruster meant to fire to help keep it on the surface after initial landing didn't fire, and neither did the harpoons, hence the bounce - but, at a velocity of about 30cm/s, Philae remained well under the comet's escape velocity of 1m/s. Despite the hitches, truly, a remarkable mission - the scientists involved will have plenty to work on. (And rather happily, the enthusiasm was reflected elsewhere: "There were 479,434 tweets in 24 hours about the comet landing, while Kardashian['s nude photos] had 307,782 mentions in the same time period." We win! =:)

Here's rather a nifty anthology of hares - their historical roles, perceptions, and portrayals.

You've all encountered "Things I Will Not Work With", ne? Here's an entry on a variant of the theme, wherein he asked, "What's the most valuable item you've seen someone ruin in a lab?" My, but his readers delivered. ^_^; (And then there's this brief anecdote, from When Reagents Attack: "Not an accident. But once we made a large batch of nitrogen triiodide (safe when wet, contact explosive when dry) for a high school demonstration. Before we could set it off on our own with a long meter stick with a feather on the end, a fly landed on the the dry powder - KABOOM. Caught everyone (especially the fly) by surprise." And indeed, Wikipedia confirms: "it can even be detonated by alpha radiation" =:)

Here's rather a nifty short - a fan-made, fully hand-animated music video set to one of Kesha's tracks, Die Young.

Lucy, Luc Besson's latest. I'm very mixed here - there's a lot of fun to be had, but, you do have to ignore a good deal of BS offered as perfectly rational explanation, revolving around the "we only use 10% of our cerebral capcity" trope, and remains about as scientific. If it'd been presented as a superhero yarn, it might've worked quite a bit better. 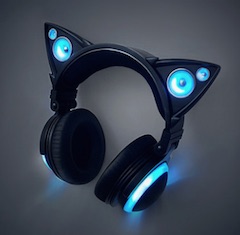 If I Stay. Usually, if there's any division, I wind up sympathising with the critics, but here - I felt the lead actor played her part exceptionally well, helping coalsesce a tale of potential regret.

Guardians of the Galaxy. I'm still not quite sure what to make of it, actually. There's much I enjoyed, but as a whole, it sort of skimmed over me - none of the characters had any depth, and I'm not keen on hyperkinetic camerawork, which I'm happy to leave within the domain of Michael Bay. For me, I think it'd be a great party flick - you're not so much concentrating on the film, so much as enjoying it alongside the conversation and riffing.

Here, have a selection of illustrations, by Rebecca Hawkes (warning: Facebook), on Why Cats Purr.

If you're a felid with a love of electronica, how about these rather fun cat ear headphones? =:D

Of potential interest to

momentrabbit - not sure how long it's been thus, but Black Magic's Fusion compositing suite is available as an advanced version for $995, or a highly functional free edition. Windows only, sadly.

TIL that the iPad Air (and maybe other earlier models) can handle 60fps video - which does offer rather a slick effect, even when interpolated, as demonstrated in this battle between Twilight Sparkle and Tirek and this AMV, Into the Labyrinth. To view them at 60fps, click on the cog icon in the lower right - depending on your browser (it seems fine with Safari, Chrome, and IE, but not always Firefox; 4K Video Downloader currently shows 60fps as "3D"), you should be able to simply select it as an option. (Any recommendations for native 60fps video? These are both upconversions from conventional 30fps files. Come to that, are any studios yet offering high framerate files? I'd imagine it's possible to offer such on Blu-Ray, though I've no idea if it's mandatory for anything but the usual PAL/NTSC framerates to be supported)

And just to note, the competition whose results I'm very eagerly awaiting is still ongoing. It's not easy, waiting for news that could mean so much. ^_^; Wait I must, however, with a balanced sense of hope. (What will I do if I am listed as a winner or runner-up? Probably, first, spend several minutes with anime-wide eyes =:)

Now to partake of as many of the superb offerings at the White Horse's Barleywine & Old Ale Festival, commencing with a pint of Thornbridge's deeply warming Barrel Aged Yule, at a comforting 7.4%. And so many other wonderful potent brews on offer, including two from the Wild Beer Company, Modus Operandi and Yankee Sandwich, and Harvey's Christmas Ale. Happy bunny. ^_^