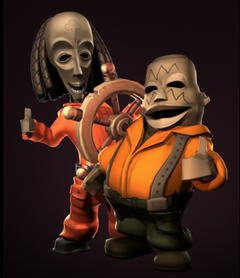 One game that caught my eye recently - though I'd actually downloaded it a while back - was The Journey Down: Chapter One, a particularly stylish point & click adventure, with exceptionally good voice work, background music, design, and writing. Give the trailer a try, and see what you think. ^_^ I was reminded by the recent (and eventual, if I'd been waiting for it..) release of the second instalment. It's apparently also out for OS X, Linux, and Windows.

Yay! Briefly, I'd thought OS X Yosemite had inadvertently killed DxO Optics Pro 8, a useful photographic processing application - launching it just caused it to immediately keel over rather wistfully. But, with the latest beta, that's all resolved. ^_^ I may well go with their new version at some point, as I might find some use for their new noise reduction, but I'm in no great hurry - 8 does a superb job on chromatic aberration removal, let alone compensating for lens flaws, not least distortion, as well as offering the ability to correct perspective easily. I do wish they'd drop their odd marketing practice of selling two versions, split in just one regard - "pro" camera owners get to pay double as much. If you want to process D7100 RAWs, no problem for the Standard edition; if you want to do the same on a D800's output, you get to pay twice as much for the Elite edition. It's not something that affects me, but it seems difficult to justify, other than "it's not illegal".

Doctor Who "Listen" was exceptional. Really, thoroughly enjoyed that one - and the grab at the end was quite perfect. Who else? O.o; Every producer of children's TV needs to see at least this episode - there's nothing wrong with being scary. Roald Dahl certainly knew that. =:D

Previously, I'd wondered why "chip & pin" cards weren't a thing in the US, when the UK's had them for several years. Apparently, much as you'd expect, it's all down to money - in particular, the subtle differences in telecoms costs, leading to UK retailers tending to batch transactions at the end of the day, giving fraudsters more time to abuse a stolen card. The converse isn't covered as strongly, but does note that in 2012, "the US accounted for less than a quarter of the world’s payment card volume, but it incurred almost half of the fraud losses" - so, it's a change that could've taken place a while ago, but didn't.

A while back, I followed a particularly good webcomic, Mullein Fields, which I was reminded of when perusing through my archive of saved strips (if a particular day's strip really catches me, I'll save that one). Wondering what became of it, a quick search showed the artist segued to Inhuman Relations, along vaguely similar lines - if the look and style of humor of Pogo appeals to you, it'd definitely be worth checking out. Here's an example of Mullein Fields, to give you some idea. ^_^


Have you ever made your own ice cream? (This is, I suppose, calling out for a particular bun to weigh in..) It seems simple enough, at least outside food competition time constraints, with the tremendous benefit of knowing precisely what's going in, not just marketing platitudes. Which would probably be good, if terribly imbalanced. =:)

I recently rediscovered the video from an exceptional PS2 game, The Lion and the King - or rather, its sequel. The video quality's unfortunately rather poor, but there's not much being lost. I'll have to make that available somehow - it's quite supremely awful, from the poorly copied Disney style, through the *ahem* minimalist animation, and the voice acting seemingly performed by basically one person.

With the recent gig now concluded, I might poke my muzzle back into the previous code again. H.265's very nifty, but the allure of encoding to contours instead has such tremendous potential. Plenty of challenges lie ahead for the project, but they're of so novel a nature - it's understandable it'd have such shiny appeal for me. =:)

BTW, if you're visiting the Natural History Museum's "Vault", try to bear in mind that, in the quest for a great photo, one should endeavor not to lean down on the glass above the remarkable jewel-encrusted tobacco box from the Tsar, as you may find a remarkably well-mannered guard reminding you of the alarm systems in operation. ^_^; Notwithstanding, here are a couple examples. First, from the Vault, a most peculiar - yet entirely natural - mineral formation. The NHM's caption card reads: "Sometimes nature can produce specimens so seemingly contrived that it is hard to believe they were not made by a human. This intriguing box formed when crystals of brown siderite were deposited around a cube-shaped fluorite crystal. The crystal dissolved away and crystals of white quartz and golden chalcopyrite grew in the cavity. Scientists do not know what could have caused the fluorite to dissolve without affecting the siderite box around it. The mine in Devon is famous for its hollow casts, or epimorphs, and this is the best example known."


And, from the Treasures room, "Barbary lion skull.

The oldest lion found in the UK after the extinction of native wild lions, brought to England as a royal mascot around 700 years ago."


Not-really-cocktail du jour: home-made vanilla vodka/essence, white rum, diet cola. The key is the former, but it's not as arcane as it might seem - just a vanilla pod, snipped into a few bits, in a little (100ml or so) vodka, and left for a few weeks. It turns into a wonderful thing. ^_^ Forget any vanilla essence or anything like that - real, actual vanilla, infused for that time, brings out such a richness of flavor! And white rum just happens to complement it perfectly, acting like a non-dairy milk, in terms of playing nicely with the flavors present. Forget this - just try it. =:)

Tuesday's outing also saw me dare to dive into this whole meeting people thing, after eventually finding The Hole in the Wall, where

huskyteer was holding a birthday bash. ^_^ That turned out to be even more fun than I could've hoped, augmented by the random association on the table with a thrash metal musician who's apparently toured fairly extensively, which led to some unpredictably enjoyable conversational diversions. =:D (And I knew of Einstürzende Neubauten, too, which might have surprised him a little =:) A distinct bonus was winding up meeting

gerald_duck for the first time since 1998. Naturally, I didn't actually recognise him until he admitted his identity - my memory of faces can be atrocious, I'm afraid. I do hope that's not the last time I encounter the others present, too, who also made for very good conversation indeed, despite the inevitable ambient pub hubbub. Yay for more birthdays!

Okay, another gem from the NHM. ^_^ How about John Audubon's snowy owls? "Audubon published The Birds of America in batches of 5 pages. He sold them for 2 guineas (equivalent to about £100 today) to wealthy individuals and institutions. Subscribers could collect full or partial sets, or buy all 4 volumes of the book for £182 (equivalent to £9,000 today). It is thought that fewer than 200 complete sets were produced and only 120 are known to survive."


The newly announced Sigma 150-600mm f/5-6.3 lenses do indeed look interesting. Going by their MTF charts, the Sports version may even exceed the Nikkor 300mm f/4D's, when used on an APS-C body. (The Sigma's aren't marked, but I'm guessing the charts on the left are the Contemporary, Sport on the right) Pricing appears to be £1599, $1999 or 2099€. (If you're unfamiliar with MTF charts, here's a handy guide to what's actually being conveyed)

A short of note: Robo-Trumble, reminiscent of the seminal Pixar short Luxo Jr - except, here, there's no CGI, with the camera on the end of a robotic arm. It's good fun. (Cute credits, too) And there's also a "making of".

If you're missing a free Bluray player on your system, peek over here for instructions on how to get VLC to handle encrypted Bluray discs. It's quite straightforward, just involving downloading the appropriate AACS library for your OS (OS X, Linux, Windows) and the keys file, and dropping them into the correct locations.

Finally, have a couple buns. ^_^ These are from a couple recent trips back to the original bunspot - and yes, they're still thriving, though one strip along the path has now been seemingly temporarily filled with gravel, perhaps debris from a neighboring construction project. Greenery's poking through already, though, suggesting it doesn't presage covering that over. The field really is quite ideal for my purposes, and theirs. =:) It's somewhat long and thin, with the long edge running alongside a well-used cycle path, so the buns are relatively okay with seeing people around on a routine basis. Better yet, the field has a few patches of briar on the path edge, giving them comfortable places to hide out, so there are opportunities within relatively short photographic reach - I'm reminded of why I never bothered picking up any teleconverter there: I simply didn't need one, much of the time. And the assortment of vegetation makes for some interestingly varied backdrops, too. With a good, healthy population there, usually quite active, it truly is a setting I can return to and enjoy a sense of both peacefulness and excitement, as I attempt to track all the individuals involved - who seems particularly feisty or springy that day.


Even buns have their disagreements. Rabbits may not be as toothily endowed as predators, but those teeth can chomp through some tough brambles, and those claws are very much not for decoration.