So, it's been revealed that Linden Lab is working on a new, next-gen virtual world, to some extent compatible with Second Life, but without that as a confining criterion. Overall, I'd say this is a very good development, as trying to maintain compatibility seems like a very easy means to swamp the new project with hacks to try to make it behave like the current world, rather than being able to learn from experience. Importation appears to be an intent, where practical - I know I'm quite attached to my av, though I suppose I could be won over. There've been other leporine avs since the Kani, of course, but there's just something about that look which.. feels like quite a part of me, by now. (Kudos to Ebbe, CEO of the Lab, for actually joining in the discussion!) Perhaps most significantly, for me, is the intent to head away from a land-based economy, where (almost) all sims cost $299/mo, leaving purely social venues or artistic projects in an awkward position, dependent on someone being able to shell out that much every month. If the simulator becomes more dynamic, only being required when necessary (an SL sim is always running, regardless), it's conceivable the cost could drop dramatically. Concurrency, of course, remains a tricky subject - WoW goes with shards, with its own issues, whereas an SL location is shared by everyone, making for very modest numbers - from 40 up to maybe 100 - possible before the lagmonster grips everyone. 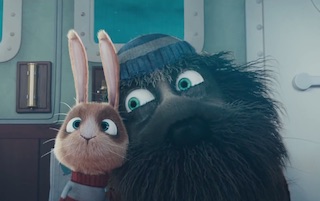 I really hope Resan Till Fjäderkungens Rike receives English subtitles! What's not to love about seafaring bunnies, pirates, and a travelling circus? And all starring bunnies. ^_^

In CSS colors, from now on, rebeccapurple means #663399. Not that anybody wishes it'd been this way.

Double Fine's Broken Age: yea or nay? OS X or iPad? The latter version being about 1/3 the price, so, I'm not sure if I'll get significantly more or less between the two versions.

Yay, tickets booked for a return to my previous haunt next weekend. ^_^ First, stopping off overnight to visit Mum and take her out for dinner somewhere, before meeting up in town for an afternoon/evening of chatting, drinking, and generally enjoying the wonders of the locality. (And for the second time ever, I'm taking First Class. ^_^ Not that it's a long trip for the main leg, but still, FGW's seats there are rather nice, plus tables for everyone, and much quieter, plus the freebies - not much of a price difference, either. Indeed, cheaper than the South Western route I was originally intending on the way in, until I read of what weak sauce their First Class offering is - possibly a different design seat, and that's it, if anything)

Here's rather a good discourse on the value of Sailor Moon in feminism. Its image may be humble in some eyes, but, you might be surprised at how game-changing it actually was.

So, I'll be heading down to the old bunspot today, with the rental lens in tow. (At least, if the weather doesn't threaten to turn dramatically rotten) 'Course, buns are dreadfully unpredictable sorts, so I might well wind up looking at a meadow all evening, but they usually tended to be in evidence, particularly as the day drew on. Much as I'd love to visit the cider Mecca, the timing wouldn't really work, and the lens kit is enough to haul around. ^_^; Ah, someday. Definitely something I miss from living thereabouts, but there are always gains and losses wherever I move - I love the Bay Area, but there are precious few wild buns to be found, even in Tilden or San Bruno Mountain. Even as fond as I am of Bath, again, very little by way of wildlife, though I did finally twig that they were simply laying in wait on campus, until the afternoon stretched on, in a couple particular spots.

As for the buns - here's one of the recent shots, courtesy of said monster: "The art of the stretch", taken at improbable distance. I was absolutely delighted to find it hit Flickr Explore, resulting in around 7,000 views, and about 120 faves. Yay! All the better to spread the word of lapinity. =:)

(Interesting - looks like they've rejigged the layout again, this time for the better! Now, there's the photo, all the comments, the tags, the groups, all visible at the same time. Much as it had originally been, but still, if that's how Flickr's heading now, I'm all for it)

I noticed some welcome tidbits in the recent LJ News posting: LJ friends pages will remain in your journal style, with the new "feed" being another option (just use /feed instead of /friends), and that comments in new-style pages once more have subject lines.

SF Pride is next weekend, and yes, there will be a furry float. ^_^ If anyone's going along, I'd love to see photos!

Bounce Below "is a network of trampolines and slides mounted to the walls of an abandoned slate mine at heights of 20 feet to 180 feet off the ground. Visitors are welcome to climb, bounce, slide, and jump in the netting amidst a technicolor light show." - so, if North Wales is within reach.. !

Did you know it's International Red Panda Day on September 20th 2014?