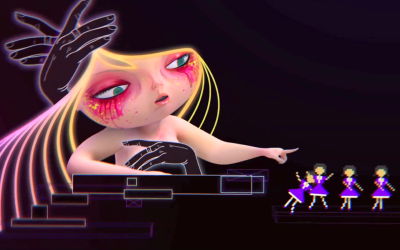 Studio Killers have a Kickstarter running! Only a fortnight long, though, and it's quite ambitious, with a £50k target, to permit them to play live gigs. =:D (Kicktraq) It's also worth noting the updates - they've revised the rewards, so higher tiers do indeed receive all the digital goodies of lower levels.

And, they also have a new EP out, "Grand Finale", which you can find at all the usual venues, eg iTunes. ^_^ And if you're somehow unfamiliar with their work, here are their two music videos so far: Eros & Apollo and Ode to the Bouncer.

The other night, I had the tremendous privilege of enjoying most of the Bonzo Dog Doo-Dah Band - which may ring no bells with many of you, but will with some, I know. ^_^ I shan't critique the show - suffice to say, they're much less sensible than you might expect - but I wanted to note one of the CDs they were selling, a spread of the 1920s jazz originals they went on to add their distinctive style to. One in particular caught my eye, "Masculine Women and Feminine Men", by the Savoy Havana Band, released on February 26 1926. "This track wins our vote for the most rock and roll lyric of the 1920s. Almost pre-empting the gender bender glam rock of the 1970s, this nugget features the lines 'Girls were girls and boys were boys when I was a tot, now we don't know who is who or even what's what. Knickers and trousers baggy and wide, nobody knows who's walking inside, those masculine women and feminine men.'"

The UK apparently now has its first pinball museum, located in Ramsgate. =:D Don't suppose anyone knows of some machines in London? There must be some lurking there somewhere.

I noticed TashiroYu's produced a guide to making your own fursuit, starting on that page, and proceeding for another twenty or so pages - just keep navigating "newer" for subsequent pages. It'll be a handy refresher for me, as it's been way too long since I last attempted a 'suit - and then, it was (as with Red) a foam carved head, whereas I feel that wouldn't be quite appropriate for bringing my SL self into RL, as that's better for larger, more toony heads.

Just a couple brief notes, by way of initial impressions:

- a little surprisingly, if you're on the iOS dev program, you'll also be good for OS X Yosemite, as well as iOS 8. I'm pleased about that, as the whole seamless iOS/OS X integration is something I've long wished for.

- upgrading was almost uneventful, save for the initial launch of Mail leaving me with an immobile progress bar for updating. Force-quitting it and relaunching brought Mail up immediately, so I suppose that's just its idea of a prank. =:/

- the typography is, as you'll have seen from the keynote, unified with iOS. It's a little odd, but I think I'll warm to it fairly readily. The WiFi icon could do with being heavier, to distinguish it from inactive/activating.

- no big problems on the iPad or iPhone thus far. Had the Preferences quit on the iPad on first launch, but hey, early beta.

- launching Xcode for the first time requires a few extra components, requiring iTunes to quit, which it seemed unwilling to go along with. (See above)

- iOS 8 installed on the iPhone and iPad uneventfully. Odd that iTunes can apparently only handle updating one device at a time, though. =:/

- annoyingly, the default on the iPad requires immediate entry of one's passcode to unlock. Worth resetting that to something lenient, if you're in a setting where it won't be abused. The iPhone required re-enabling of use of touch ID for unlocking, with the existing print data untouched.

- no devices have yet exploded.

As for the rest of the keynote.. well, that was a thing. =:D Really liking the whole "continuity" thing, which has seemed so obvious for such a long time. A new lower-level graphics API? That'll be interesting to follow. And a new language? If it can indeed provide the performance gains advertised, and do away with some of the more common programming banes, that'd only be a good thing. True, it's yet another language, but then again, I'm not really impacted, being currently on the C++11 team, with a distinct leaning toward the lower level side of things. (My, how marvellously uncomplicated Intel's ISA is!)

- as Byzantine as LJ's coding is, it's apparently reversed tack with Yosemite. Where previously OmniWeb 6's preview/post buttons didn't do anything, and only mainline Safari worked, now OW6 works fine, and Safari's dead in the water. I can live with that. ^_^;
Collapse