I noticed a bumblebee in the house, seemingly exhausted - I had to gently nudge them to even realise they were still alive. Carefully, I picked them up on a piece of paper, and left a few drops of sugar syrup for them.

A few minutes later, I went back to check up on them, and found it being hungrily slurped down.

They've had their fill, it seems - now, they're wandering around the sill in the bathroom, occasionally buzzing briefly, as if warming up.

[Photo of bumblebee feeding, behind cut, in case insects squick anyone] 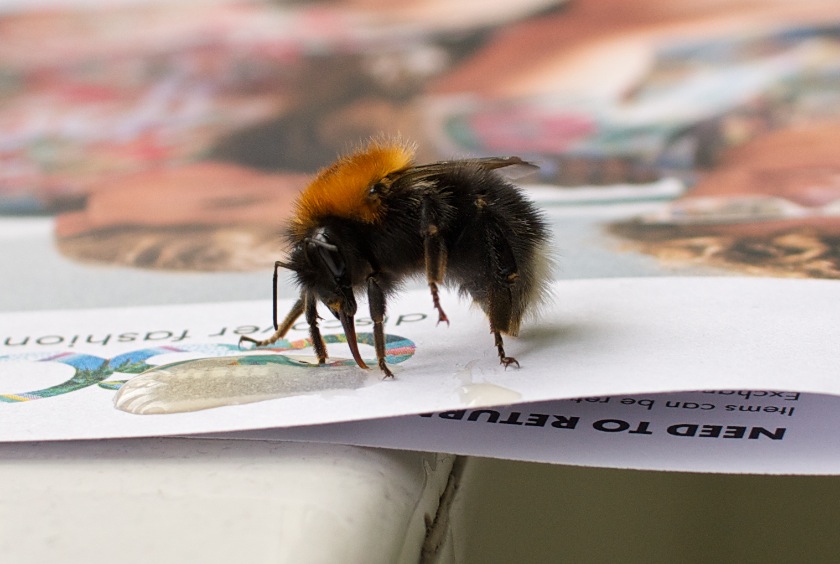 ETA: having checked up on them periodically, I now see they've apparently made it outside. ^_^ Which means they were well enough to fly upward about two feet to the window opening. Still, I'm left wondering why they might've been in such a seemingly poor condition originally. In any event, I'm happy there's a bit more pollenation going on in the world. ^_^

ETA2: nope, they were caught in between the bottles of bubble bath - I thought I heard some energetic buzzing, and eventually found them. They did seem to have energy again, though, with a lot of hovering-level flight, so I lifted the bottle they'd semi-attached to, and hoisted it to the window. Sure enough, they went buzzing off loudly into the big wide world.
Collapse