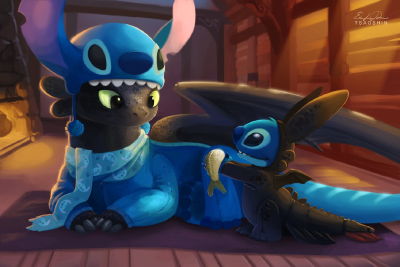 Here's a kitty worth sharing (SFW). =:9 And for some serious cuteness, Toothless & Stitch, cosplaying each other. ^_^

whitetail just might like to look at this collection of Disney cakes (from Cake Wrecks, but from their Sunday Sweets selection, highlighting exemplary works of cake art - a change of tone from their usual role).

Who'd like a wine tasting? I'm not absolutely certain I can transfer it, but I can specify the venue, time, and date, which seems like much the same thing. I bought it (cheaply =:) at Grillstock last year, but, regrettably, the roomie/landlord's not been forthcoming with any options since. It's good for up to four people. If I recall correctly, they'll supply the glassware, but nibbles are up to you. ^_^ I believe they'll go anywhere in the UK.

A photography thread I found interesting, on unusual assignments - some quite odd, a few rather gruesome. (I'd recommend the site in general, too, if you have any photographic inclinations)

Vinyl Scratch would approve, I feel, of this bass cannon tank. =:D

I see Zero Theorem's pre-release page on the UK iTunes Store has gained an actual release date: 21st July 2014. Still a little way off, but, good to know I'll be able to finally see it then, given how rapidly it departed most screens.

While idly perusing the iTunes Store the other day - sort of digitally window shopping - I noticed one indie film Apple had highlighted, whose poster design caught my eye, and a title that positively beckoned me to take a further look. No reviews there, but IMDb showed it sporting an 8.7: "Neurons to Nirvana: Understanding Psychedelic Medicines". It would appear to be a genuine examination of the utility of psychoactives, as detailed in an interview with the director over on Motherboard, "a look at the history and the future of scientific research into five psychelic substances: LSD, psilocybin, ayahuasca, MDMA, and cannabis. In it, various highly-regarded scientists and experts in the field talk about the medicinal potential of the drugs. The filmmakers are careful in their approach. Each of them notes that scientific studies and vocabulary, presented in a mainstream way, are necessary to educate the public about psychedelic medicine. They realize they are up against a lot of government—not to mention big business—disinformation, and paranoia about psychedelics."

I noticed the other day that not only is/are WeLoveFine offering leggings - I'd previously picked up three pairs from them, and definitely recommended - but cire leggings. =:D Whilst the Loki helmet design was very tempting, the ones I went for this time around were the Miku chromatic. Also finally got around to augmenting the t-shirt stock, too, with Daft Pon3, the wonderfully understated Lazuli Skies, and The Music.

This comic by Immelmann, "Lagomoria", pushed many buttons for me. ^_^ It's actually SFW, too, though you might still have to account for reading about shiny mind-control bunnies from space that transform those around them into more of themselves. Please record or transcribe any such conversations.

Does anyone have an easy solution to remove twitter autoposts from LJ feeds? Perhaps a Safari extension? Though, a proxy filter would be best, as my primary browser remains one that doesn't support plugins, but does sport the best tabs implementation, with scrollable graphical thumbnails. Thinking of which, is there an extension for Safari or Firefox that accomplishes a similar result? Safari's a capable browser these days, but I still just really don't like those text-only tabs butting up against each other.

Has anyone seen the film Ruby Sparks? It's what seems to be an imaginative romantic comedy, of a relatively mellow nature - sounds quite appealing. ^_^ I'm asking as iTunes has it for £7.99, including extras, which feels like a reasonable price. If it's something I'll watch a few times, I'd far sooner pay for it than simply fetch it off the usual venues. (And if it isn't, I'll probably just not see it at all. There are a billion things to do with one's life, and sitting through bad films - as opposed to good bad films =:) - isn't high on my priorities)


Here's what life on minimum wage is like in St Louis, Missouri. It's an earnest account of just how difficult it is - not a matter of making ends meet, but deciding what can't be paid for, be it fuel for a car, a monthly bus pass (of course, daily tickets work out more expensive, but if you don't have the money up front, what choice do you have?), or heating.

The League Against Cruel Sports is running a worthwhile campaign against the use of snares.

Well, that's a bit disappointing. I recently gained another card identical (in rating, at least - SanDisk 90MB/s SDXC. The packaging's slightly different) to my first one, so I thought I'd set the D7100 to simultaneous writing mode, wherein each frame is written to both cards, serving as a backup in case one card goes south. However, I hadn't reckoned on the D7100 evidently having only one SD Card controller - so, rather than writing both simultaneously, it appears to write to one and then the other, halving the continuous shooting speed. That's seldom a problem for me, as I'm almost never running over the D7100's unfortunately bijou buffer, which can hold about six losslessly compressed RAWs before the speed drops to that dictated by cards. That is, when you're taking those first six shots, the shutter rate is the full 6fps (12 bit, DX frame; 14 bit drops by 1fps, "crop" mode raises it by 1fps), after which it's however quickly data can be written to the card(s). Of course, a couple days after changing that setting, I encounter a pair of buns engaged in a furious melée, chasing, leaping, biting - and run headlong into the buffer. The end result is that once the buffer's filled up, in parallel write mode, it's about 600ms between shots, and 250-350ms if using overflow mode, where only one card is used, then the other. So, I suppose it's back to the latter for me. All the same, I'm pleased to report some quite exciting moments were caught. ^_^

So, LJ's rejigged the "post entry" page, along with the preferences. I quite like the appearance, but, it sort of loses in the usability stakes - while trying to post this, OmniWeb wouldn't load the preview's CSS, rendering it useless for previewing the entry's layout (you might not believe the time I spend getting images cropped and sized, then making sure that the text flows around in a reasonably uncluttered manner). The nightly of WebKit shows the preview button, but it's dead. The "mainline" release of Safari is, thankfully, fine. (Regarding Safari, if you want to geek out, check out this WebKit development blog entry on the project's new integration of LLVM into the JavaScript pipeline. Did you realise how multi-layered the approach of modern browsers is when it comes to executing JS?)