Where did your handwriting style come from? In my case, I think it was an early teacher - the style stuck, quickly, so I was fluently cursive when others were starting to come to terms with it. Mind, that was partly just due to how often we moved around, so our teaching schedules were probably all askew. Not that I literally write much at all now, of course, though perhaps I'll take up calligraphy again. (At the second restaurant we owned, I wrote the menus, in Old English font. Couldn't do that so easily at the first, as that's where I came into the world =:) 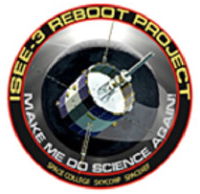 Here's a crowdfunded project with a difference: help capture a probe passing by Earth again after decades in space. "We intend to contact the ISEE-3 (International Sun-Earth Explorer) spacecraft, command it to fire its engine and enter an orbit near Earth, and then resume its original mission - a mission it began in 1978. ISEE-3 was rechristened as the International Comet Explorer (ICE). If we are successful it may also still be able to chase yet another comet." They're operating with NASA's blessing (indeed, working out of an old McDonalds on NASA Ames), but without any official funding available. "ISEE-3 must be contacted in the next month or so and it must complete its orbit change maneuvers no later than mid-June 2014. There is excitement ahead as well: part of the maneuvers will include a flyby of the Moon at an altitude of less than 50 km."

So, it seems Larry Wilmore will be succeeding Stephen Colbert in his show, with the new production being "The Minority Report". =:D

Answering a question I raised a little while back, wherein I pondered when is MasterChef filmed (as in, how long ago): this article from the Cotswold Journal notes that last year's episode featuring the Fire Service College in Moreton aired in April 2013, and was recorded in November 2012! So, if that kind of schedule's been kept this year, that would mean whoever is MasterChef 2014 has (quietly, we presume =:) been thus since December 2013 or January 2014. (Confirmed by the Daily Mail in this story of 2010's winner, Dhruv Baker, who had to stay quiet about his victory for six months) Still, it's no less engaging for that. ^_^ And we're well and truly at the point where all of them are highly capable, skilled, and imaginative, as we saw so ably demonstrated in Thursday's invention test.

I have business cards! ^_^ 100 of them, with all twelve of the original set (I added three in May's site update) cycled through on the front, and the text info on the rear of each. I'm pleased with them. ^_^ That said, I think I'll shift the logo upward just a tiny bit on the next version - the "L" feels like it's sitting a bit heavy on the bottom edge. (And I must thank

momentrabbit for his favicon for the site - such an improvement over my original doodle!)

Is anyone familiar with the wild and woolly world of unRAID? At some point in the next year or so, I might migrate all my storage to such a setup. One thing I'm unsure of, though, is: can the drives be external (probably USB 3), or must they be internal SATA? I'd prefer to use something tiny (similar size to a Mac mini, say), and just plug an extra drive in somewhere nearby. As for the duff drive, sadly, that seems dead beyond easy retrieval - I tried putting it back into the freezer, but this time, not even a directory could be read. Just repeatedly came up as "4.14TB Seagate USB Storage Media", rather than the correct capacity and model name. Bit of a curious failure mode, really - clearly, it's managing to go through much of the USB negotiation sequence. Still, that coupled with the occasional loud squeaks and repeated head seek sounds suggests it's not something that'd be a data source again without a clean room, and it's really not that important a drive - so, it's on its way to meet its maker. Not a very impressive lifetime, given it was only bought in January 2013 - it'd seen some use, but relatively light, just serving as part of the house storage network.

w00t! Finally got my Mountain Lion & iTunes 10.7 VM back up and running. Not as easy as it might be, as the version of ML you can download from Apple already has iTunes 11. That said, it's also not especially difficult to downgrade - use something like AppZapper to remove iTunes 11, then Pacifist to drop 10.7 in place instead. (Why? With Requiem 4.1, I can strip the DRM from iTunes Store purchases, rendering them playable on the BD player downstairs. But, the developer retired from the project a while ago, and subsequent iTunes and Java updates are incompatible with it) So, I've been gradually redownloading all my past purchases - and, of course, realising how much I've still got to watch. ^_^; Most of The Fades and Frozen Planet, especially, plus a couple films (links to trailers): Somm, Mr Nobody, and Tale of a Forest.

Who's going to be watching Eurovision? *yay* I do hope there'll be some fun acts - ones with a sense of fun, trying to be different, or just plain shiny. ^_^ I'm getting some bits together for a good evening's finger food feast, for the occasion - a few good cheeses, some very nice (and cheap!) Italian style ham, a probably good pork pie, some Scotch eggs.. we've got no shortage of beer, cider, and spirits around, but maybe a great Shiraz or Barolo seems like a good idea as well. And something fishy.. maybe some good smoked salmon. Some sundried tomatoes and/or chargrilled artichokes might not be a bad idea, too. (Yep, picked up some gravlax and crab pate, so that's covered, plus Waitrose's particularly tasty chargrilled artichokes. Also thought it'd be useful to get some Boudier Curaçao triple sec from Dijon, for authentic Long Island Iced Teas - wow, this is seriously yummy! It's brimming with that lovely crisp, fresh orange nature. Mixed with two volumes of ginger ale, you wind up with a supremely relaxed, refined, mildly spicy orangey drink. ^_^)

And with a little prompting, I watched Austria's semi-final performance for Eurovision. Oh, my. <3 If they're joint favorites with Sweden, they must have something pretty wonderful on offer too.

Add in a six-episode session of MLP:FiM (I'm about four behind at the moment), taking in the day's finale, and yes - Saturday could be a seriously fun day. ^_^

Should I be quite so excited for Eurovision? If Austria wins, I'm liable to explode in a rainbow of squee. ^_^

Anyway, all the supplies are in for the event: just picked up the bread (two crusty baguettes, warm from the oven, along with a sourdough bloomer and an olive focaccia) and some sliced meats (some more of the superb Italian style ham I tried the other day, as well as some hot Italian salami and some peppered salt beef), and some cream cheese stuffed sweet peppers. And to ensure the availability of really good Long Island Iced Teas, some good London gin (much as I enjoy the graanjenever here, it's really quite a different animal) and white rum (similarly, Captain Morgan's spiced is highly palatable, but it wants to take over the flavor in a cocktail).

Anyone else watching? ^_^
Collapse