Here's a bit of linguistic fun: The Great Language Game. You begin with three lives, and are presented with short audio clips. Beneath, a few choices of which language it might be. I suspect there'll be some impressively high scores from some folk here..

paka pointed out a neat little discovery of 8,000 year old artefacts including flint tools and knives, courtesy of an industrious local warren. ^_^ "They dug two little burrows right next to each other and all these treasures were thrown out of the earth. No one knows the scale of it but it's a gold mine. A family of rabbits has just rewritten the history books."

David Attenborough, rarely, has spoken of his frustration with climate change denialists and creationists.

A couple friends leave a bar in San Francisco late at night. On their way home, they spot a bicycle accident, leaving one rider with an injured chin and foot, so one of them calls 911 to summon assistance. What happens next? I admit, not top of my list of possible outcomes would be getting locked up in solitary. The comments here provide no comfort.

One animated feature I'll have to seek out, I think, is Rio 2096: A Story of Love and Fury, an epic tale of "six hundred years in the life of an immortal man who, obsessed with finding an existence with the woman he loves, continually takes on the role of a revolutionary fighting the system. “The film is about resistance, that’s the point. The hero is not a hero. He is a loser—he loses all of the time, but he never stops fighting.” Whether he’s facing colonization during the 1500s, social unrest in the 1970s or class warfare ignited by dwindling natural resources at the end of the 21st century, he always finds himself in the role of an everyman whose life is at the mercy of the greedy and the powerful."

Maybe something a little more contemplative? How about Michael Dudok de Wit's The Red Turtle? "Dudok de Wit, who is using the charcoal drawing and watercolor wash techniques that he used on Father and Daughter, has said that the film “shows a deep respect for nature, including human nature, and conveys a sense of peace and awe at the immensity of life.” His name alone should be reason enough to get any animation fan excited, but if you’re not convinced yet that this will be a special film, you may be interested to know that Studio Ghibli has signed on as a co-producer, marking the first time that the famed Japanese studio has attached their name to a Western film project." 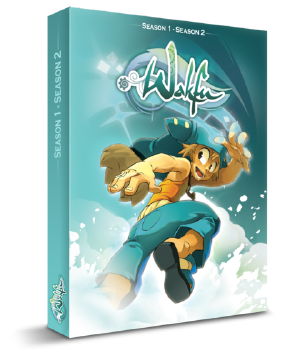 The French animated series Wakfu is coming to the end of a highly successful Kickstarter, intended to fund international dubbing and subtitling. If you want to chip in, you can get both seasons on region-free Blu-Ray, plus other nifty goodies, for a mere fifty-five Canadian dollars. ^_^ You can get some idea of what it's about from the opening sequence from season two. (And if you're pondering backing Three Halves, do! Looking at their Kicktraq page suggests the funding's stalled in the past few days, currently leaving them at about two thirds of their £6,000 goal)

Want to find out how many Americans believe astrology to be "sort of" or "very" scientific? You may be surprised, and not in a good way. Perhaps more surprising is that the trend is for greater belief in astrology in the younger age groups, descending with age, with some 55% holding a "scientific" belief in the 18-24 bracket. There may be some degree of comfort, however: it seems highly likely that at least some of these people were simply confused between "astrology" and "astronomy".

I had no idea there was such a thing as a Madness musical, but lo: Our House was apparently on the West End in 2003, and won the Olivier Award for "best new musical". Customer reviews seem glowing, too. Had anyone else heard about it before? In any event, I've ordered a copy. ^_^ (On the film front, one rather fun title we watched recently was Juggernaut, aka "Terror on the Britannic". While we were expecting something enjoyably cheesy, it turned out to be quite a bit better than that - a good ol' disaster flick, but with quite a British style to it, like the passengers still persisting on enjoying the games on deck despite the terrible weather. ^_^ Then there are other tiny touches, like the Captain's interest in curious paperweights, and the state-of-the-art Pong machine - this being 1974 - being enjoyed by a couple children. With Richard Harris, Omar Sharif, Anthony Hopkins, Ian Holm, and Roy Kinnear, it's got the cast to make a creditable production, even if the dialogue rarely inspires. Irksomely, the DVD mastering left a thick border around all edges, so, TBH, you might be just as well off finding a good rip that's already taken care of that, and the somewhat low level audio)

Looking at the trailer, it does seem like Zombeavers delivers precisely what you'd expect: zombie beavers. ^_^;

Revisiting the jenever from the other week: it's undergone quite a transformation, and in a very pleasant regard. ^_^ It's now.. still quite distinctly a sort of gin (and clearly not English), but with an additional degree of complexity I hadn't found on its initial opening, as well as somewhat mellowing. If anything, it's headed along to Scotch land. =:D

Appropriately, the first game I've known to heat up the iPad Air significantly was Little Inferno. ^_^;

You may have seen a rather fun YouTube video with a bunch of old floppy drives playing Tainted Love. One such person was Marc Almond, who recorded vocals for it. =:D
Collapse