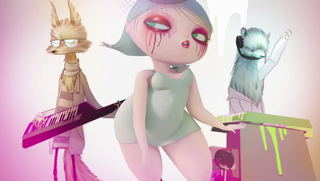 The debut Studio Killers album is now out. =:D iTunes UK (£7.99), iTunes US ($9.99), Amazon UK (£6.99), Amazon US ($9.99). The track listings are, thankfully, all the same. (I'm not a fan of "exclusives", meaning you can't actually buy the complete album anywhere, when iTunes has one version, Amazon another, and maybe another version or two just to complete the marketing fun) I suppose it pretty much goes without saying: if you enjoyed Eros & Apollo and Ode to the Bouncer, you ought to pick this up with rapidity.

If you're inclined to try a new adventure title, have a look at the trailer for The Night of the Rabbit. It's out now, for OS X and Windows. I'm absolutely loving the look of it! "Lose yourself in a tale of magic and wonder, where anything is possible and where nothing is quite as it seems: join young Jerry and follow a peculiar white rabbit to the wondrous realm of Mousewood, a land where critters can speak and where mystery abounds. It is here that Jerry’s dream of being a magician comes true, though a haunting, sinister force casts a long shadow over the forest. Someone offers the residents of Mousewood a deal of their lifetime - tickets to the greatest magic show that the world has ever seen. But the price is steep, as they'll have to stake their most precious possessions and also their lives."

whitetail might want to check out - supremely adorable. ^_^ Postino "I Love It" 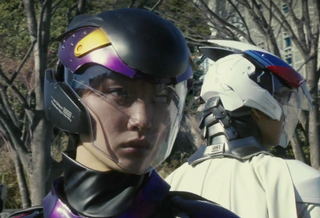 Toho just released a trailer for a live-action Gatchaman (re-edited and dubbed in English as Battle of the Planets). It's looking rather good. No subtitles on it, but that hardly matters. ^_^ Looks like it comes out on August 24.

Here's a one (very tall =:) page comic that's well worth a read: Darkness, about one guy's unfortunate roommate, who is Dark. He hypothesises some people are just somehow pure elements of some kind or another, like one woman he knew was simply Kind. Witty and touching, it was a 24-hour project at Angouleme last year.

You've heard of Parkinson's Disease. It can be tackled using "deep brain stimulation", involving surgery to implant two probes, which are then driven by a pacemaker of sorts. This remarkable video by Andrew Johnson demonstrates just what an impact it can have, wherein he introduces himself with it turned on, showing quite normal dexterity, and then, without. It's not what you'd call a subtle change.

Here's an intriguing look at Noma's Claus Meyer's latest venture: Gustu, in La Paz, Bolivia. His justification? "If you have access to a large diversity of products, unknown to foodies, then you have a strong chance of coming up with something that could have global interest. Bolivia may have the most interesting and unexplored biodiversity in the world." 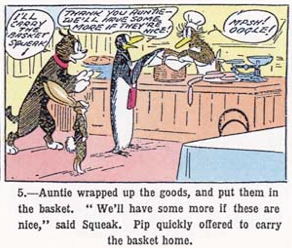 loganberrybunny noted its existence, and it certainly didn't ring any bells with me. The reason he did so? The characters were a dog, penguin, and rabbit - and there was apparently a substantial fandom, with meetups, parties, and an annual convention. ^_^

Here's a great little introduction to (modern) FPGAs. Concisely, it demonstrates just why FPGAs can be quite so nifty, with benefits including the possibility of large numbers of parallel instructions, and the lack of necessity for operations to occupy a whole tick.

An interesting UK photography competition (which includes a category for mobile device cameras, so, no need for high-end equipment): Made in Britain. "Through your photo images we're seeking to present a picture of contemporary British manufacturing, giving it greater visibility and changing the misconception that 'Britain doesn't make anything anymore'." A cool twist: "Companies who have signed up to the campaign will be encouraged to open their facilities to allow our photographers access for the competition." So you might be able to take some shots of facilities not normally so accessible. In any event, it's open for entries until Sep 30 2013. If you do enter, by all means, share your shots!

If you've seen any UK TV news in the past ten years or so, this Screenwipe clip on how to report the news will seem more than a little familiar. =:D

I was reviewing some recent rabbiteering photos while in one of my old haunts last week, and couldn't help but giggle away at seeing this particular expression, from one bun who's clearly trying to keep their head level, but angle their mouth to take the rather awkwardly vertical grass they're eyeing. =:D


Ah, so much to be said for a good pub when they'll not only reload the crackers on the cheese board, but even top up the cheese itself. ^_^ In this instance, a particularly good soft white, Brie like, "Oxford College White", with an almost truffle-like nature.

Mark Steel takes on the plans for legal aid cuts, in brilliantly incisive style. 'Even more efficiently, another company eager to provide cut-price lawyers is G4S, the security firm that also has the contract to transfer convicted prisoners from the courtroom to the jail. So the G4S lawyer can tell their client: “The guilty verdict may be slightly disappointing, but the good news is you’re being taken to the slammer by my colleague Dave who’s a right laugh, so it’s worked out quite well, all in all.” Maybe G4S can offer a discount if the same person does both jobs, saying: “I’ve brought the witness statements, and I’ve got the handcuffs in case I arse it up, so, either way, I’m prepared.”'

However, Tuesday night's adventure at home.. worked out well. =:9 I'd bought some beautifully pungent smoked garlic back at Grillstock, and on Monday, aspied a lean beef joint of just the right size, reduced for quick sale. That was my cue. ^_^ That night, I cut up about one and a half large bulbs of that smoked garlic into the slow cooker, popped in a few small tomatoes I had lying around, the joint, and then a can of chopped tomatoes. To make up the volume, the remaining half bottle of red wine that'd been sitting around since October, waiting for such an opportunity, also went in. And then, just time - until lunchtime the next day, when I added a bit of smoked paprika, to aid with the smoky nature I was aiming for, some Berber spice mix, for a bit of heat and complexity, and a smoked pepper (chipotle), cut up finely. Now, come dinner time, that was indeed all tasting pretty good.. but then the housemate wondered about adding Jack Daniels honey bourbon, and I thought a dash of Grand Marnier might work well with the beef too - so in they went. And voilà! Really, that made it. =:9 A bit of thickening up with arrowroot, and it made a truly memorable sauce. The meat, needless to say, was as tender and suffused with its flavors as you'd hope. (Wound up serving it with some mustard greens and perogies)

eliki pointed out an Indiegogo fundraiser to push a short into being, and provide the initial thrust to bring the troup together: Melancomedy. Have a look at what they're proposing to achieve, and consider Phlebashelping.

If I'm ever on the East Coast again, I know I'll have to spend at least a full day in the Silverball Museum, packed full with real pinball machines. =:D (And the cost's easy, too! All day for $20, or from 5pm to closing for $10? Oh, yes!) Many thanks are due to

austin_dern for reminding me of its existence.

momentrabbit spotted this presentation of the Blade Runner sketchbook, crammed with detailed insights into the design and styling of the world of the movie.

The next step in the Conservatives' war on welfare proceeds as mean-spiritedly farcical as one would expect: "Those who do not have a significant health problems will be mandated – under threat of sanction – to take part in Work Related Activity (meaning work, workfare, jobsearch or training) for 35 hours a week. Single parents with children between the ages of 5 and 13 will usually be required to spend 24 hours a week looking for work. Even those with serious disabilities or health conditions, currently in the Work Related Activity Group and claiming ESA, will have some form of mandated jobsearch." Yes, they really do mean looking for work for 35 hours a week - as if jobhunting isn't a full-time occupation already, and a particularly despiriting and poorly paid one at that. Training? Well, we've seen through successive governments just what that amounts to.. try going for anything that would genuinely improve your professional options, and you'll soon discover just how tremulously slender the options really are. Workfare - ah, yes, the wonders of mandated "work", under the guise of "work experience". That is to say, stacking shelves or running a register - but not being paid for it; rather, the company gets paid for it. So you wind up still being unemployed, but with the costs of attending - meanwhile, the company gets free work, and the labor market's reduced by another genuinely paying position. It might not even be quite as bad were the companies involved in real need, unable to pay minimum wage - but we're talking about highly profitable chains like Tesco and Homebase. Still, you've got to admire the cynical method by which they circumvent minimum wage legislation - and that's the core of it: if you're working, you must be paid at least that pittance. That's not the case here, even aside from the questionable value of the "experience" gained in such positions.

Odd dream bit: a ropey old style Doctor Who monster, clearly voiced by the same guy behind Bungle. (Perhaps influenced by that night's DW: The Twin Dilemma. FSM's sake, that really needed some strict editing down - barely a two-parter) 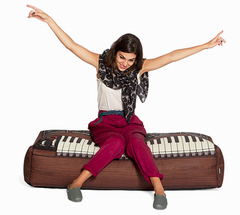 Finally updated my public key the other day. GPGMail for Mountain Lion was finally updated recently, so protecting email's a trivial matter again. ^_^ Would that Apple would officially support GPGMail, but secure email doesn't seem to be much of a priority anywhere. Strange, that. =:/ (If you're not aware of LJ's support for such: if on their user info page, they have an icon of a key to the right of their username, you can click on that to view their public key)

The Bob Moog Foundation, which champions music education, is having a fun little raffle - winner gets a rather spiffy synthesiser beanbag from Woouf. =:D It's open internationally; tickets are $10, or $40 for five.

Obviously, given it's published on Sigma's own site, it's unlikely to be critical thereof, but this first look at Sigma's new 18-35mm f/1.8 does look awfully tempting. At some point, I'd certainly enjoy getting one - that flexibility and impressive aperture (it's a crop lens, not full-frame) is an appealing combination.

There is, apparently, an Australian variety of lizard with the fairly unsurpassable name of the Ornate Crevice-Dragon.
Collapse