Always in such a rush these days.. (Sometimes, at least the weekends afford a chance to relax)

I really can't add anything to

timberwoof's Tale of the Frozen Gorilla.

Again with the cooking questions! Just one this time, though: when you take a pizza out of the freezer, do you put it straight in the oven, or do you feel compelled to augment its supplied toppings?

You all know about the dog in the manger, right? Have a gander at this lapine clip. (Only twenty seconds long, and worth every moment =:)

Quite a fascinating career change, I felt: one of SL's original architects, Cory Ondrejka, who left the company a couple months back, has apparently just taken up a position with EMI, as Senior VP of Digital Strategy. Whilst EMI is one of the "big four" labels, they've also been comparatively forthcoming about offering their music without "protection".

kuma_chan can probably verify the accuracy of Scary-Go-Round's look at how to become a postman.

Damn.. Bob's Foam Factory burned down. Not just an excellent resource for 'suiters, but Bob himself is just a fantastically enthusiastic, helpful guy. I hope they're able to set the business back up again.

So, the 3G iPhone's officially on its way. Of note, beyond the device itself, has been O2's confirmation, unofficially, that they will permit using it as a Bluetooth modem for laptops, and officially will be offering it on a prepaid basis, rather than strictly contract-only. No word on the PAYG pricing, but contract pricing ranges from free to £99 for the 8GB model, or up to £159 for the 16GB, depending on the tier.

On the P.A.Semi front, apparently His Steveness has confirmed the, or at least, a role for the new acquisition: the design of bespoke chippery for the iPhone/iPod family.

It's been officially confirmed that s3 of Torchwood will be five one-hour episodes, forming a single story. Perhaps more interesting, though, is the news that Chris Chibnall, responsible for the execrable Cyberwoman (and not much better "42" in Doctor Who), has departed the show, vacating his position as lead writer. (And you've probably noticed Russell T Davies, responsible for bringing the Doctor back, has been awarded an OBE! True, the honors don't mean as much as they may once have done, but still quite nifty to see such tacit acknowledgement of the show =:) 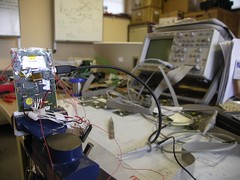 After a long Friday (8am to midnight) in the salt mine, the coworker (crashing for the night, given the hour) and I finally got back to the warren, and it seemed like a good opportunity to use up the good margherita pizza I had sitting in the fridge. Damn, did that turn out well. ^_^ First, some herbiness - plenty of garlic powder, some herbes de provence, asafoetida, and piri-piri relish. Then, meat - three slices of lean free-range bacon, and a diced chicken breast. Finally, capers, six sliced mushrooms, and at his suggestion, some finely chopped pickled red cabbage, which I actually have in the fridge, courtesy of the owners. ^_^ It turned out to be a little too large for the microwave (in convection oven mode), but the situation sorted itself out with a little drooping off the metal platform, leaving the crust typically perfect, though I did need to finish it off with a couple minutes microwaving, as I'd lowered the temperature a little to allow for the added toppings. There wasn't so much as a niblet of crust left at the end. ^_^

(He also suggests starfruit or kiwi fruit as a very good accompaniment to steak. Has anyone tried that? I'm going to, needless to say. Fruit can complement meat in cooking so well, yet it's largely ignored in Western cooking, beyond "Hawaiian" pizza - for my money, peaches work much better with ham than pineapple on a pizza)

And as for what we're working on - well, it's still pre-release, so I can't say much about it, but here's one of the boards I've been working on recently, with a variety of lines being monitored, using a combo oscilloscope and logic analyzer. Soldering onto that scale of SMD component is a little tricky, but surprisingly feasible, even if a hot air pencil will always do a much cleaner job than soldering irons. Still quite a bit to be done, but the end isn't far off. ^_^