Ah, the little things in life.. like watching the 6 Parnassus taking the corner off Haight, and the little sparks that result, as its electrodes - like the feelers of some cyborg insect - shift from the path straight ahead, and take the corner too. (Sometime, I need to try the N up here - coming from the salt mine, it'd be a pretty easy walk, with 4th & King only a couple blocks away)

Take a look at this (safe for work) picture, at normal distance from the screen. Then move a few feet back.

I have no idea. ^_^ (Safe for managers and maiden aunts) [Edit: URL updated]

foofers, the grandmaster of "Iron Crotch" demonstrates pulling a truck with.. a part of his anatomy not generally used in that manner.

Canvascape is a proof-of-concept using the <canvas> tag found in Firefox, Safari, and Opera - a 3D walkaround in Javascript.

With the recent switch of LJ's server farm from the winterlands of Seattle to the halcyon fields of San Francisco, you may well have noticed some oddities, like some comments not triggering notification emails - this LJ tool lists recent comments in your journal.

Now that a dream machine is in my life, I've been peeking in on a few game demos again, for the first time in a few years.. ^_^; Carrying on from the original, I think I'll probably wind up getting a code for Nanosaur 2.

Damn! I'm always cautious about customising a computer, as most such results bear rather too much similarity to poor translations of tacky Honda mods. But this laser etching that

rabitguy noted is really rather cool.

Well, that was a little out of the ordinary, at least for me - the sound system for Harry Potter chose to give out around the point where Snape cautioned Harry about stealing from his supplies, leaving us with only the stereo mix; nothing from the surround channels at all. Not enough to spoil what was, after all, a very good film (and one worthy of seeing theatrically), but a bit of a dampener. Still, the eight or so who wound up wandering along to Guest Services at the Metreon received a free pass, so it works out well enough. (Though one there noted this was the second time she'd had that happen there) It's easily the darkest of the Potter movies thus far - and I'm led to understand the books continue that trend.

Beer for the day: St Feuillien's Cuvée de Noël, as elegant a Belgian seasonal ale as you'll find, owing both to its original recipe, and the cellar aging for several months. Highly recommended. (Found at Whole Foods Market - a very dangerous place)

And the raccoons are not what they seem.

So I now know what the fire alarms sound like here: just a solid, monotonous blare. Response time wasn't bad, on the order of five minutes. We were a little surprised to see them go up in the elevator, though. And it rained, too. Still, 4th & King's not far, and I'm waterproof. 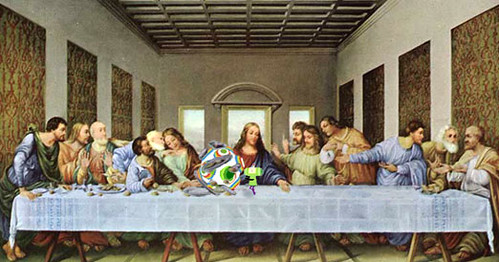